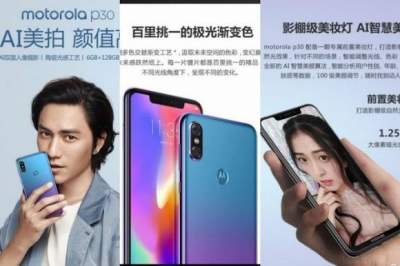 On the eve of the official presentation of the smartphone Motorola P30 his picture published Chinese unit manufacturer.

It turned out that the appearance of the gadget Motorola P30 is very similar to the look of the iPhone X.

Sources claim that the company is working on devices P30 P30 P30 and Play Note. Although Motorola has not confirmed or officially announced their devices, they have been seen on the web site of the company in China. Also the Motorola account in Chinese social network Weibo says about the imminent announcement of the gadget.

Motorola P30, apparently, will get a 6.2-inch screen with an aspect ratio of 19:9 and very high resolution in the style of iPhone X. On the rear panel will be installed two-chamber, which will shift to the edge, with a 16-megapixel and 5-megapixel lens. The cameras will probably be the support of artificial intelligence, although it is unclear what functions it will perform.

The hardware is based on Qualcomm Snapdragon processor 636, 6 GB of RAM and 64 or 128 GB of internal flash memory, expandable cards with capacity up to 128 GB. The battery has a capacity of 3000 mAh.

Less is known about the Motorola P30 P30 Note and Play, but the teaser Weibo indicates that the next Motorola phone will get the battery capacity of 5000 mAh. Probably this battery belongs to one of these two phones. The official debut of a Motorola smartphone P30 P30 P30 Note Play and is expected in the coming days.