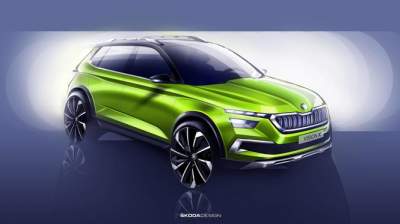 The main feature of the machine is to use a hybrid power-plant.

The concept car Skoda Vision X will be able to work on gas, gasoline and electricity.

To introduce a novelty in early March at the Geneva motor show.

The main feature of the machine is to use a hybrid power-plant. Vision X equipped four-cylinder 1.5-liter TSI engine that is used on a large number of cars of the VW Group. This type of engine was designed to operate on compressed natural gas. In this mode, the engine produces 130 horsepower.

As representatives of Skoda, as the car will have two electric motor, one of which is connected to the engine and is used as a starter-generator, the second is installed on the rear axle and provides the all-wheel drive. The second motor is activated to enable the extra power when you start or improve traction on slippery roads and off-road. 48-volt lithium-ion battery can be charged while the concept of moving.

Gas storage there are two cylinders that are located under the rear seat and behind the rear axle. Since gas is the main fuel, for gasoline provided for a reserve fuel tank.

It is noted that the machine is devoid of the traditional driveshaft, which allowed to reduce the weight of the car to switch modes, making the crossover front, full or rear wheel drive as needed.