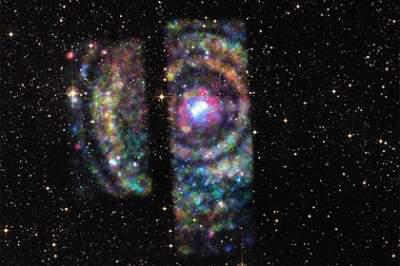 Scientists have identified how black power is dependent on the cylindrical shape of the body.

Brazilian scientists have found that such superdense body like a neutron star have on other objects attracting powerful “black power.” The so-called impact arising from the emission of ceretelevo radiation. About it reported in a press release.

Black bodies in physics is an object that absorbs all incident electromagnetic waves. Despite the name, they may when heated emit its own radiation, called cerotelium. In 2013, scientists found that the latter may change the internal energy of atoms and molecules in the surroundings. They are attracted to the body. This impact was named by researchers the “black power”.

In the new work of physicists have considered how this force is affected by the deformation space which arises near the exotic cosmic objects. A spherical black body, such as a neutron star have a strong gravitational field strongly distorts the trajectory moving around them objects, and photons (quanta of electromagnetic radiation). This curvature increases the body’s temperature, and also changes the angle at which the radiation leaves the surface of the neutron star. As a result, the surrounding objects are affected by the more potent “black power” than in the case of undeformed space.

Scientists have also determined how black power is dependent on the cylindrical shape of the body. If the diameter of the cylinder in the mathematical model reduce, turning it into a hypothetical space the “string” that impacts ceretelevo radiation completely stops.

Physicists believe that their findings will allow accurately determine the effects of superdense objects (including black holes) for forming beams of energetic particles and accretion disks.