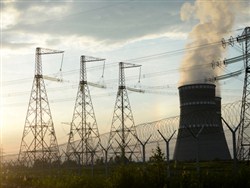 Three power unit of the Kalininskaya nuclear power plant in the Tver region was disconnected from the network. About RIA Novosti reported with reference to Rosenergoatom.

According to them, the shutdown occurred due to power off one of the transformers. “From the disconnection of the current transformer outdoor switchgear 750 kV disconnected power line. As a result, disconnected from the network, first, second, and fourth power units of Kalinin NPP,” — said the Agency interlocutor.

In a Single duty dispatching service of the city Udomlya told TASS that the shutdown of the fourth unit occurred from-for break of the seal of the condenser of the turbine number two.

The causes of the incident are specified. It is noted that the background radiation around the plant is normal, damage is also not detected. Problems with equipment at the station no, assured the representatives of the company. In addition, this situation will not affect consumers.