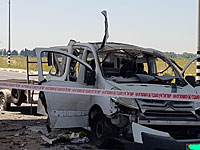 Preliminary investigation revealed that the Citroen, which followed on may 5 by the 34th track on the section between the village of Yad Mordechai and Sderot from the Gaza strip was released anti-tank missile “Kornet”.

In the result of a direct rocket hit in the car, the driver, a man about 60 years, was fatally wounded. The doctors at the hospital “Barzilai” in Ashkelon was pronounced dead.

After this attack, the traffic on specified section of 34th highway was blocked.

A previous attack using anti-tank complex “cornet” was carried out by militants from Gaza on 12 November 2018, when at the time of aggravation of the situation on the border with Gaza near the war memorial “Black arrow” was hit by an Israeli bus. Then the shelling was seriously wounded one of the soldiers. Shortly before the shelling of the bus it was about 50 soldiers.

7 APR 2011 between kibbutz Nahal Oz and Saad intersection missile “cornet” was hit by a passenger bus that led to the death of one person.