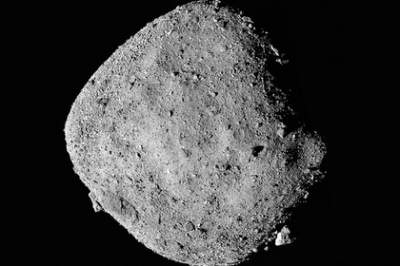 The discovery was made using by NASA’s OSIRIS-REx.

Astronomers noticed in the near-earth asteroid Bennu previously unknown phenomenon, expressed in the emission of dust from the surrounding cloud.

The discovery was made using by NASA’s OSIRIS-REx, which fixed the phenomenon 11 times over the entire study period of the asteroid. The first plume was discovered on 6 January 2019, and in the next two months – all the rest.

In some cases the dust was thrown into space, others remained in orbit. The emissions pose no threat to space station, but their origin remains a mystery. On other asteroids, this phenomenon is not observed, although a similar phenomenon has been detected on comets. In this case it could be caused by ice, which sublimated under the surface of the comet, destroying the cavity and throwing dust. However, the asteroids contain no ice.

According to scientists, the Bennu is too close to the Sun to have ice. However, he could emerge in a remote part of the Solar system, and then to move closer, which would explain the dust emission.

Further research will help confirm or refute this view.

Bennu is a small asteroid with a diameter of half a kilometer. Some experts call it the most dangerous of the heavenly bodies that could potentially collide with Earth. However, the probability of falling on the planet is one chetyrehtysyachnuyu.