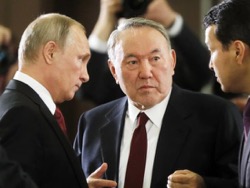 Kazakhstan “heated” metallurgists of Russia 25.2 billion rubles, by the grace of their products to the Russian market. To such conclusion came the Ministry of industry and trade of the Russian Federation, announced on 30 January a source in the Department familiar with the investigation.

“This is a direct loss of metallurgists from-for sharp falling of the prices in the Russian market due to the increase in subsidized Astana deliveries. Is lost profit and, accordingly, five billion rubles less taxes to the Russian budget,” — said the source.

According to him, now Russian officials are discussing the possibility of compensatory measures in more than $ 800 million in relation to flat-rolled steel from Kazakhstan.

We will remind: scandal in the Kazakh steel erupted at the end of 2017. In the Ministry of industry and trade of the Russian Federation filed a complaint with the Association of ferrous metallurgy enterprises “Russian steel”. The paper noted that over the seven months of 2017 Astana has delivered nearly 90% more metal than the year before. And this is because Kazakhstan producers of flat rolled get prohibited subsidies that contribute to the growth of its import to the territory of the Russian Federation. According to the Association, should take measures to eliminate unequal conditions of competition in the market. And now, according to leaks from the Ministry of industry and trade, the response is not far off.

I must say, this is not the first time when Astana is actually engaged in a trade war with Moscow. Previously, large-scale conflict broke out between the Railways of the two countries. Kazakhstan is not allowed in its network of Russian innovative cars with increased (over 25 tons) axle load. And in Russia a large-scale check of rostransnadzora have revealed the presence of 1.2 thousand faulty cars in Kazakhstan, including prohibited — with the Chinese side frame. In Moscow already declared that Astana violates the interstate agreement on the CIS level.

Trade war in the Eurasian economic Union is conducted in the direction of Minsk. 24 Jan Russian Association of consumer goods manufacturers complained to Prime Minister Dmitry Medvedev on the actions of Belarus in the EAEU. They reported that in Belarus still operates a mandatory state examination of imported products, despite the presence of certificates of conformity of the goods to the requirements of the EAEC. In November 2017, the Board of the Eurasian economic Commission (EEC) has recognized that Belarus has violated the provisions of paragraph 2 of article 53 of the EAEC Treaty, which obliges members of the Union to ensure circulation of products conforming to the requirements of the Union without any additional procedures. However, Minsk is a requirement of the Commission to cancel the examination for imported goods is ignored.

The actions of Belarus makes unfair competition and are a barrier to the functioning of the internal market, concluded the Russian Industrialists in the letter to Medvedev. In fact, the situation is even worse.

Conflicts with Belarus and Kazakhstan are bad signals for all the participants of the EEU. “Economic separatism,” which show the key players of the Union, undermines the credibility of the idea of a single economic space. And this can have a negative impact not only on the volume of bilateral trade, but — in the end — at the strategic policy partnership the participants of the EEU.

What is behind the trade wars with Kazakhstan and Belarus, as in reality, the prospects of the EAEU?

— Economic integration is never painless, — said the Deputy Director of the Institute of CIS countries Igor Shishkin. — Especially if we are talking about the integration of the various States. This Soviet republics was the General economy, and decisions at the state level was adopted so that various sectors do not compete in different areas. Now the situation is completely different, plus the economy of EEU member States of the capitalist.

This is an important point: an asset in a capitalist economy owned by specific people, and these people are interested in maximizing profit, not in the prosperity of a particular state, and especially economic Union countries.

How difficult the path of integration in such circumstances, well illustrated by the example of the EU. European States are being constantly shaken by economic clashes. But the leaders of leading European countries are well aware of this friction is the norm. None of these leaders does not make hysterical statements that the EU collapses.

Meanwhile, the conflict of interests between the producers of Germany, France, Italy objectively exist. Of war and trade in the EU area do not surprise anyone, although the EU is primarily an economic Union.

“SP”: — do you think that trade wars between Russia, Belarus and Kazakhstan do not endanger the existence of the EEU?

— No, do not put. The EEU is really a lot of problems associated with the settling of inter-state interests. It is impossible, moreover, to say that the Eurasian managerial and Supervisory bodies of work verhafteten.

In fact, the EEU is long overdue the issue of powers to supranational bodies. But the solution rests in political problems, and they are associated with enormous external pressure from the West, which is on all members of the EAEU.

I will remind, in December, the U.S. Bank of New York Mellon has blocked the assets of the National Fund of Kazakhstan received from the sale of oil is just over $ 22 billion They were frozen at the suit of a Moldovan businessman Anatol Stati. For the Central Asian republics is a huge amount (After the recent visit of Nazarbayev to the USA assets were frozen — ed.)

All internal differences do not mean that the EEU need to put a cross. It is no coincidence that our main geopolitical rival, the United States has openly stated that Eurasian economic integration is absolutely unacceptable for America, and is a challenge to American interests. It logically follows that Eurasian integration is clearly beneficial for Russia.

All understand: if integration in Eurasia have undermined the economy of the Russian Federation, USA nothing wrong with that saw. US security is threatened, on the contrary, the strengthening of our economic position. And the EEU is still one of the elements of such reinforcement.

Trade disputes of the Russian Federation with Belarus and Kazakhstan should not be viewed as a manifestation of the collapse of the EEU, — said the political scientist, Director of Institute of political studies Sergei Markov. — It is necessary to understand economic Union — not a United country, but only a dispute resolution mechanism. Decisions within the framework of such unions are always compromises, which partially infringe on their interests, and certainly go for a cut of the profit.

Meanwhile, the culture of compromise in Russia is quite weak. European countries, especially after the disaster of two world wars, have found ways to make the culture of compromise is more lively and energetic. We have the same intransigence is considered an absolute advantage. But that intransigence creates problems when you need to act together.

This circumstance, I believe, makes our disputes with Minsk and Astana more important — and at the same time more stupid than the similar disputes between, say, France and Germany.

The pour oil on the fire and injuries of the elites of post-Soviet States. Got independence they are not deserved — they never did not fight for it. In addition, all understand very much, these elites received from the collapse of the Soviet Union, although the population would be advantageous if the Union is not dissolved, but transformed.

Because of this, the logic of independence of Kazakhstan or Belarus from Russia is very relative. Both republics may be independent and may not be: trend is determined by the interest of elites. And engineering disputes, these elites often carry on the level of sovereignty because the sovereignty is not enough natural and proper.

This increased level of conflict is particularly pronounced in a situation when the United States put on former Soviet republics external pressure, playing against Russia. On the other hand, Kazakhstan and Belarus try to take advantage of this situation to get more with Russia in trade disputes.

Finally, we must not forget that economic unions are only strong if they want to join the new country. As for the EAEU, the adoption of new members was frozen due to a hybrid of war of the West against Russia. This pause reduces the viability of the EAEU. We can say, Kazakhs and Belarusians are waiting for: the end of the hybrid war, suddenly the West will be able to beat Russia? Disintegrated Soviet Union, what is the guarantee that Russia will not disintegrate? That is why, I believe, Minsk and Astana without much enthusiasm now develop the integration of the former Soviet Union.