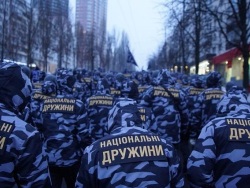 March “National teams” getting their banners and consecration held in Kiev, made a lot of noise.

In most organizations claim that there are already year — they are public power heir “Azov”, which is associated with interior Minister Arsen Avakov

However, the role will play a “team”, raises many questions. First, they can try to replace the law. Secondly, to act as a hammer to crack down on dissent. And, finally, can be the impetus that will lead to a radical script change of power.

What is the Ukrainian order

On the “presentation” video, posted on the web, sounds only one slogan: “We will install Ukrainian order”. The explanation is on the official website, “teams”: “the Purpose is to provide order on the streets of Ukrainian cities” (in the list of problems includes “social depression”, “the threat of raiding” and “full scale invasion”). The telephone number listed on the website, the militant organization has described the Ukrainian edition of “Vesti” main tasks “teams»:

“Number one is to rid the streets of drug addicts, drunkards and other anti-social elements. Now I drink an awful lot, and we’ll take the fight against this over — told reporters the neo-Nazi, explaining that we are talking about peaceful methods of struggle — the arrest until the police arrive”.

The representative of Ncorpus Roman Chernyshov explains: vigilantes financed by private businesses (without specifying, however), working within public organizations, and to cooperate with the police without weapons. At the same time on the website of the “National teams” have been online, among the issues which “do you have weapons?”and “Are you a member of the ATO?»

“By law, the maximum that will be able to do these guys is a citizen’s arrest at the time of the crime or offence until the police arrive, — have explained “news” the lawyer Rostislav Kravets. — Private, exclusive rights to the entrance of the building or the administrative offices they have no right to use handcuffs or other special equipment”.

According to him, in a situation when someone, say, uses beer in a public Park, volunteers will be able to walk up and ask to stop calling the police for the compilation of the administrative Protocol.

“The second situation is when they go to a night club or cafe and try to block it under the pretext, for example, the sale of drugs, — said the lawyer. — Here it is possible and shouting “Face on the floor.” and the robbery of cash. But, by law, they can only suggest to wait for the police.”

A comment from the adviser to the interior Minister Ivan Varchenko situation is not clarified, moreover, the use of handcuffs he considers legitimate.

“This is a completely legal action, they will agree on how and where it will carry out patrolling on the streets or on duty, he said. We would advise all citizens who want to use non-lethal weapons or to carry out valuable work for the protection of public order, to join in the work of such organizations”.

However, he also acknowledged that to demand documents from the citizens to carry out inspection of personal belongings or stop the car “vigilantes” are not eligible.

The true purpose of the creation of “Razdrogin” experts see in other. Assumptions several. First, it could be an attempt to “hawks” from the “popular front” to show his power branch, making it clear that any attempt to shift their representatives with a current staff positions will be stopped physically.

“But such attempts have, since Kiva (close to the interior Minister Ilya Kiva recently tried to remove the head of the socialist party, conducted a parallel Congress. — Ed.), ending regional structures,” — said analyst Alexander Rechmedilov.

Secondly, it can be a way Avakov “say Hello” is already the President himself.

It is the last argument of Avakov, as now again actively discussing the possible resignation of the Minister

However, Avakov himself demonstratively distanced themselves from the “teams”. “In Ukraine only one, the monopoly on violence, and is a state monopoly. Any paramilitary formation, which try to position yourself so that illegal… I, as Minister, will not allow parallel structures that try on the streets behave as an alternative paramilitary formation”, he said.

Thirdly, the objective may be trying to protect their business interests (funny that on the organization’s website clearly specifies “protection of small and medium business”). “This may be a message for NABOO, and for the other fighters: he who touches the son/friend will receive a challenge in the form of alternative security forces — says politekspert Sergey Bykov. — If Avakov — Biletsky well play your cards right, radical elements can make even the Parliament — society “cut out” trend to move away from democracy, and some experts openly speak about the need to strong leadership in difficult times”.

Another objective Rechmedilov sees the attempt to “koshmarit” disagree with the policies of the current government.

Who in the squad

According to the expert on security Sergey Shabovta, nutritious medium for the “teams” are not only veteran’s organization that store fighters, the last of the “ATO”.

“On the contrary, military personnel or those who fought, in principle, there are a few. A lot more people will come from the environment of football fans, ultras, young people who want to avoid conscription into the army under the name “service” paramilitary formations”, — said Shabovta.