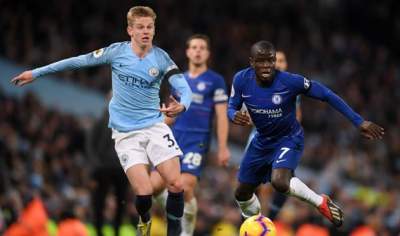 Midfielder “Manchester city” and the national team of Ukraine Alexander Zinchenko is still included in the list of interests of Vice-champion of Italy.

On the eve of Zinchenko in the Central Premier League match against Chelsea came in the starting lineup and has two assists.

On the background of the great success of Ukrainian in England the Italian edition “Corriere dello Sport” reported that Zinchenko remains in the list of priorities Napoli in the summer transfer window.

Sporting Director Cristiano Neapolitans of Giuntoli appreciates universalism Zinchenko and believes that the Ukrainian after three seasons in Europe is ripe for a new challenge.

At the same time, the source States the difficulties in the negotiations between Napoli and Manchester city. Details of the proposal of the Grand Series And Zinchenko, the Italian press does not have.

Zinchenko holds his best season since moving from “Ufa” in “Manchester city”. In all competitions, the graduate of Shakhtar played 13 matches, scoring 1 goal and gave 4 assists.

The current contract Oleksandr Zinchenko with Manchester city expires in a year and a half. Portal “Transfermarket” evaluates the player 15 million euros.