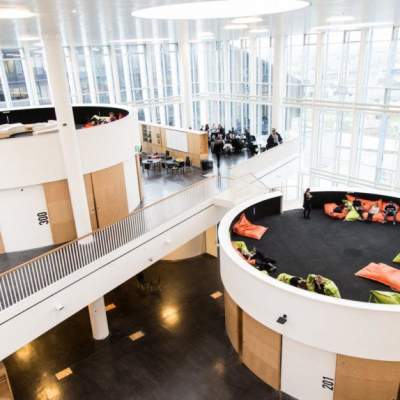 The most interesting educational experience from abroad.

We are accustomed to classroom learning system, with its constant homework, test them on a daily activities. But in the world there are many other interesting approaches to learning. Maybe we should learn something from them.

Sooner or later all the latest technology obsolete, how obsolete the good old education system of the Soviet Union, which is a creepy Ghost hovering in the mills of our schools, causing students to turn into a gray mass.

The Ørestad gymnasium in Copenhagen, Denmark
This College was built in 2005. The main core areas that the College of media, communication and culture. The structure resembles a glass cube, in which many floors and mobile platforms. These platforms are connected by a large spiral staircase.

Inside the building is very a lot of open space. As the creators say, it helps the students to develop communication skills. The College is equipped with Internet access, students use laptops, iPad s and other blessings of modern technology.

Training programs are divided into social, which includes such subjects as culture, religion, psychology, and natural: biology, health. Also there is a linguistic area where the students study three languages: native Danish, English and a third European language on the choice of the student. Training period in Ørestad – 3 years.

Steve Jobs School in Amsterdam, Holland
This is one of the most advanced schools in the world. Every student from 4th to 12th grade is issued a personal iPad, with which he will learn during the entire stay at the school. The school has not used the word “teacher”, there is only a “mentor”.

The educational program chosen by the student personally or with the help of parents. Every 6 weeks the student again regulates the program for yourself. It was created in order to eliminate unhealthy competition among students. Because every child is unique.

Spa Pou Vocatoinal School, Cambodia
This unusual school was built with funds from the Cambodian community in 2011. The plan and appearance of the school was carefully developed by the architect from Finland, who was closely associated with locals.

The main point is that learning can both adults and children. This is because in school the basics of business, how to open my own business. Therefore, students will soon have a choice: either to work in low-paid work or try to start their own business. I agree, very useful knowledge in our time.

THINK Global School
It’s not school in the traditional sense – she even no walls. The thing is that each semester is organized in different countries. For example, the first semester can pass among the Islands in the Ionian sea, where we will study ancient philosophy.

In the second semester students will be able to go to Finland, where she will study biology based on what I see around me. This is the perfect school for those who want to get out of it a true world citizen.

The Egalia School In Stockholm, Sweden
At first it may seem that this is a common school. But it was there that teach interpersonal relations and gender equality. On campus it is forbidden to use the pronouns “he”, “she”. You also cannot judge a person based on his ethnic or religious affiliation. The only criterion for evaluating the student are only his actions.

AltSchool San Francisco, USA
You all probably heard about time to make some noise generation Z. This is people who were born in 1995, and those who are born now. The particularity of this people natural rapid switching of attention from one subject to another. And at the same time these people are not able to maintain concentration on a specific object for a long period of time.

The creators of this school took into account all the changes that are happening with children. So there AltSchool. Students learn 3D modeling, learn to solve specific problems outside the box. These skills develop flexible thinking, so that later people could flexibly adapt to the rapid changes in the world. At the moment, this school is not only in San Francisco, but also in other States. Apparently, the idea was spot on.