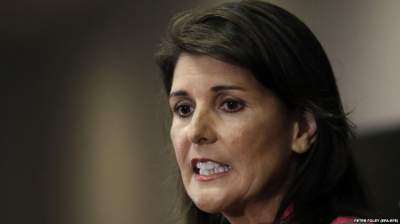 Trump is considering the candidacy of Nauert to the post of US Ambassador to the UN.

The President of the United States Donald trump is considering the candidacy of the head of the press service of the Department of state Heather Nauert to the post of US Ambassador to the UN. On Tuesday the newspaper reported Politico, citing sources in the US administration.

“Nauert close to Secretary of state Pompeo, with whom she Tuesday went to Saudi Arabia. White house staff consider it is able to act in defense of the foreign policy of the administration trump. She is also the main candidate for the post of press Secretary of the White house, which will replace Sarah Sanders, when she leaves, though this work is less appealing due to the reduction in the number of press briefings in the last two months,” the newspaper said.

She Nauert did not comment on the publication of information about his possible appointment to this position, the White house also declined to comment.