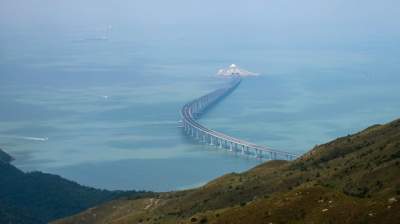 This week in the Chinese city of Zhuhai will host the opening ceremony of the unique architectural construction – the bridge that will connect mainland China with the special administrative regions of Hong Kong and Macau.

Participation in the event, which is scheduled for October 24, will be the President of China, XI Jinping, as well as the authorities of Hong Kong and Macau.

For the construction of a 55-kilometre bridge took eight years – it was constructed from 2009 to 2017, but still a year was spent on the solution of border issues. The cost of the project is also rather big – $ 20 billion.

After opening, the bridge will be a key element of transport infrastructure of the region the “Great Bay” in the South of China, where they live 68 million people.

Supporters of the project claim that the opening of the bridge six times will reduce the time of travel between Jaheem and Hong Kong or Macau from three hours to half an hour.

At the same time in their cars to enter the residents of the administrative districts will not work in Hong Kong they will have to take the bus or rent a special car.

It is worth noting that this project in Hong Kong was perceived very critically. Locals say that they don’t need roads no Juhaim or Macau, and fear that after the opening of the bridge in their town is nowhere to hide from tourists. In addition, they believe that the way Chinese authorities are trying to politically bring together Hong Kong with Beijing.