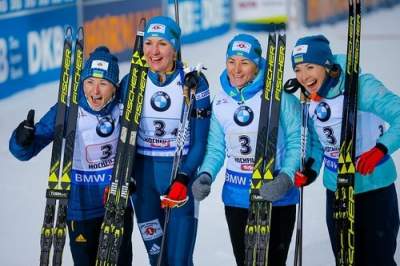 The coaching staff of national team of Ukraine on biathlon has announced the final squad for the Olympic games 2018 in Pyeongchang.

At the forthcoming Olympic games in South Korea, the Ukraine in biathlon competitions will represent the 11 athletes.

The national team of Ukraine at the Olympics in 2018:

The basis of the men’s national team of Ukraine (with the exception of Vladimir Semakov), Olena Pidhrushna and Irina Varvynets before the Olympics, from 24 to 28 January, will perform at the European Championships in Ridnaun. The second group of athletes will travel to training camp in Kazakhstan.

Recall that the 2014 Olympics in Sochi became the most successful in the history of the Ukrainian biathlon. The women’s relay team (sisters Semerenko, Olena Pidhrushna and Jim) became the Olympic champion, Vita Semerenko won silver in the sprint.

Biathlon competition at the Olympic games in Pyeongchang will be held from 10 to 23 February. Leading shooting skiers of our time will compete for 11 sets of medals.