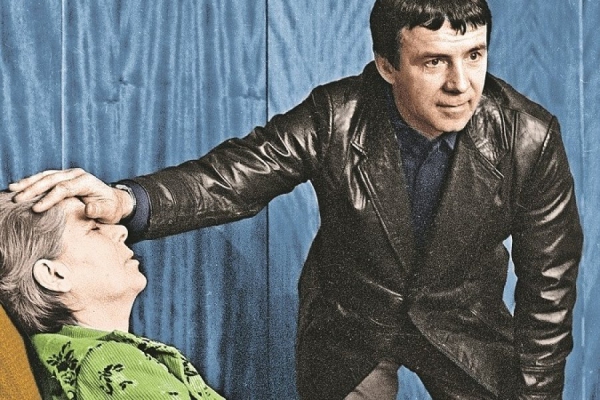 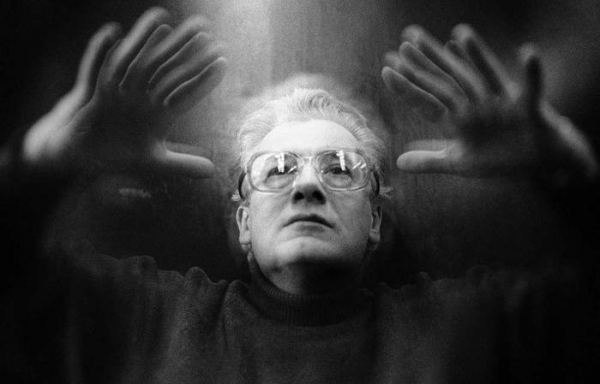 So, friends — I read here are comments to your posts about the USSR and I see that it’s time to finally settle accounts with the myths about Soviet education in which a lot of people (and possibly you) continue to believe. This myth several component parts, and they say that the Soviet education was supposedly free, teachers were very worthy, and programs of the Soviet education system was borrowed from the Russian Empire and was almost the best in the world.

In fact, all this is nothing more than myths and spread them exactly the same friends that tell stories about the most delicious in the world of the Soviet ice cream and elegant free Soviet apartments. Why they do it — I don’t know (if you know — write in comments).

So in today’s post — deal with the myths about the “quality of Soviet education”. Make sure you check out the article below, write your opinion in the comments, and of friends added do not forget. And telegram channel also subscribe)

1. “The Soviet education was free!” 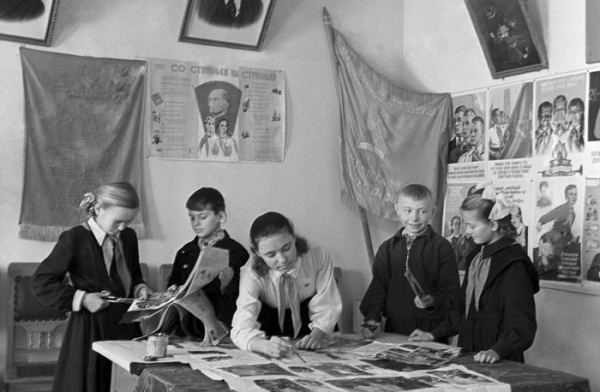 This myth has exactly the same roots as the stories about “free” Soviet apartments, which I have discussed in my blog — at least read this post. I repeat only thing — there is no absolutely nothing free. The state does not have any own money, there is only the money of the citizens which they have earned for the state has brought these funds to the budget in taxes.

Soviet man differs from the citizen of developed countries that never really knew — how much he’s paying. And the taxes actually were enormous and the individual stages of the Soviet state reached 80-90 cents from each earned ruble. That is, in pure form working Ivanov had to get like 1000 rubles, which would keep him on a mortgage payment, and for payment of good schools for children, medical insurance, and still had to 500-600 rubles free — but instead Ivanov has received at the hands of 120 rubles and stories about something “free”. That’s exactly the way it all worked.

In addition, the Soviet education in the “great” Stalin years was paid even in a direct sense (not only taxes) — from 1940 to 1956 were charged considerable tuition fees in the eighth, ninth and tenth grades, and also under this law includes all higher education institutions in the Stalin years for the “tower” had to pay (free state could provide only “tower” in the shape of a bullet).

And not to mention one very important point — despite the fact that the Soviet people paid for them a lot of money (albeit indirectly, in the form of taxes) — it is in the appendage was a purely Soviet freedom. “Free” apartment, and “free” school, it was impossible to choose, it is very difficult to change, and the overall attitude was like the government gave you something out of pocket, and you’re still bristle. “Take what is given, and that this will not happen!” — would say to the government, forgetting that all these “free” benefits was established for taxes citizens.

2. “The Soviet school was the best in the world!” 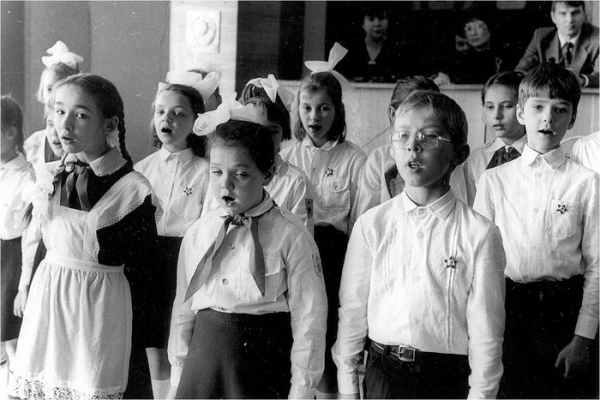 The myth of the “best in the world” the Soviet school consists of two parts — the school as an educational institution and the school as a social institution. Speaking about school education system — why it is often said that the Soviet school curriculum was borrowed in the Russian Empire, in its best high schools — this is all nonsense, which the authors heard ringing, but hell know where he is.

This situation was more or less common until about the middle (and sometimes through) the 1920-ies when the country was repercussions of the October revolution and the civil war. At the time for serious reforms in education had neither the time nor the means — and many in Soviet schools (including teachers of high schools) remained from the old life.

From the beginning 1930-x years of age old education system was completely broken and destroyed, from schools and Universities have completely removed those items that were taught somehow to think (ancient philosophy, real world history, rhetoric, logic) — replacing them with Marxist pseudoscience like “Marxism-Leninism” or “political economy”; however, many old teachers of grammar schools put in camps or simply fired. So forget those stories about some sort of “Royal schools” — they are not gone around 1927 year.

As for the Soviet school as an institution — it was non-free place, full of compulsion, drill and almost military subordination. Teachers and head teachers had nearly absolute rights — and the children only had the right to obey. However, many of the Soviet teacher was a typical media double Soviet morality in the schools was telling the children about the ideals of communism, and they lived a very different life…

3. “Soviet teachers to live with dignity!” 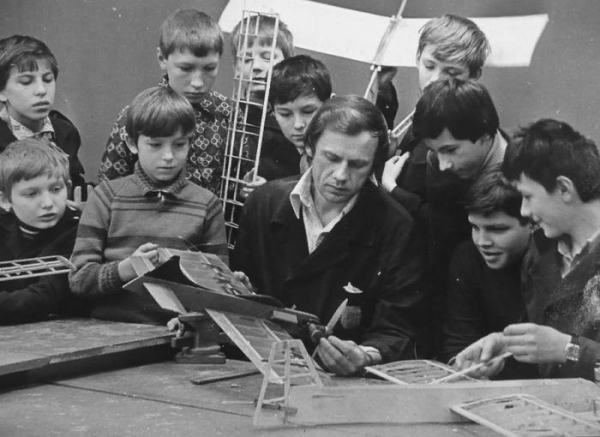 This is another part of the greater Soviet myth of the “great education system” — the alleged Soviet teachers were very great, could afford, and generally did not know the troubles. This is complete hogwash, which I know well can say first hand — as in my family were teachers of the Soviet era.

What can you say about the life of Soviet teachers? Teachers in the late Soviet Union received about 120 roubles of the salary — which was not much. Yes, the teacher did not starve — but for example on the furniture money had to collect if not several years, several months for sure. Just remember that the Soviet teacher who lived without men were very rich and could not afford anything extra about what sort of “holiday abroad” was not the question — to the same kind of services in the USSR did not exist, in principle, a Soviet citizen could only go on a tour of the Golden ring — to enjoy increased copies of matchbox houses. And the house of Soviet teachers, meanwhile, was waiting for all sorts of “lesson plans” and the mountains untested notebooks.

In addition, it is necessary to say that the Soviet teacher was a man in Soviet schools had no academic freedom, the Soviet teacher was a slave Director and head teacher, had to write some reports and going to endless “meetings”, plus could be recruited as free labour for example gluing of Windows that safely passed on to children. And such a system was built the whole scoop. 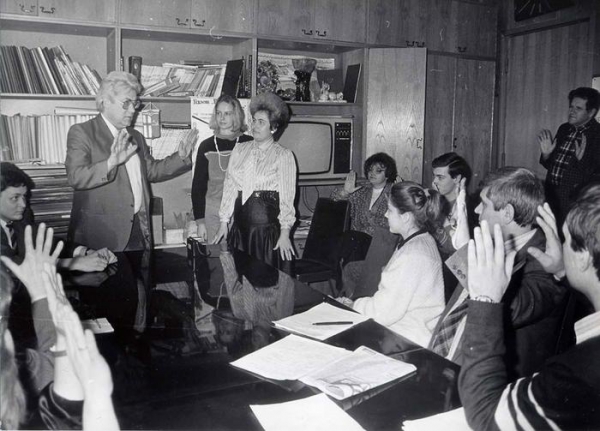 This is probably the most important part of the myth — that the Soviet education was some incredible quality, and all Western education only to him and watched razbaviv mouth with envy.

Of course, all this is a solid tale. As I wrote above — Soviet Humanities education consisted entirely of pseudo-Sciences like “Marxism-Leninism” and other “isms,” more or less well described technical subjects — but they teach more some instrumental things — for example how to calculate one or the other logarithm. To think freely and to find cause-and-effect relationship people are not taught at all.

Happened for one simple reason — truly educated person, sooner or later, would put into question the legitimacy of the Soviet system, as I have had the opportunity to compare and draw their own conclusions that it does not need the Soviet government.

In fact, in Universities people are trained simple utilitarian skills that allow the production operations of various degrees of complexity, were prepared to say so are the cogs in the system — but not taught to think. And all of these schools of the Soviet educational system immediately surfaced in the nineties, once the Soviet people were faced with something that did not correspond to Soviet reality began to”charge” the water cans at the TV because count logarithms in high school it was taught, and the General cultural level, Outlook and way of thinking remained Soviet.

5. “The crisis of Soviet education began in the nineties!” 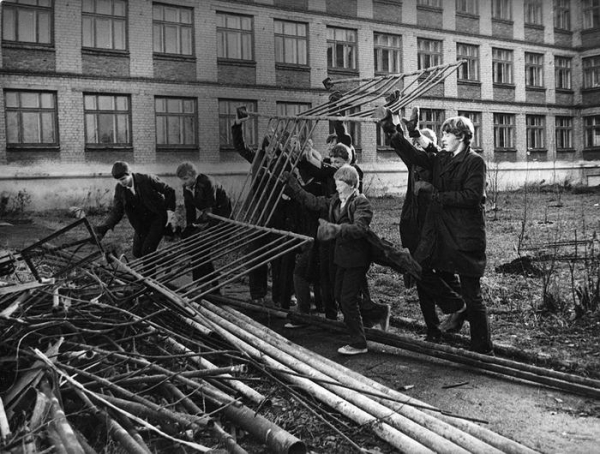 Fans of the USSR from time to time cry out that the entire degradation of the great Soviet education began supposedly only under Gorbachev, and some claim that all problems started only in the nineties. As soon as such a fan of the USSR shows photo of the school of the seventies as there will be a cry that this photo was taken no earlier than 1996, when “Gaidar has been stolen entirely the whole country.”

In fact, problems in Soviet education began long before — in the sixties even a purely technical disciplines were taught badly — the youth fled to the cities from the poor villages, they massively opened vocational school, where all the Sciences were taught most often at a low level. In addition, there were problems with the updating of the teaching staff and there was a shortage of staff — young people did not hurry to go to learn on poorly paid teachers, often in schools worked ladies are already deep in the retirement age (70+ years) — just look at Soviet films, they are full of older uchilok.

In addition, approximately since the 1970s years, the salary of a teacher began to rapidly decline — if in 1960-m to year the salary of the teachers was 79% of the average wage in the industry, in 1985 — only 63%. In General, as you can see — all “problems of the schools of the nineties”, like shortage of personnel, the elderly and grumbling teachers poverty wages — began in the USSR.

Instead of an epilogue.

Instead of an epilogue I want to write a few words about modern education. It is considered that it is very far away from the Soviet Union — but it’s not. And in Russia, and in Belarus and Ukraine schooling remains sufficiently shovels, the children still have to stand at the entrance of the teacher (an atavism, left over from the Soviet drill), remained unchanged in the system of division into classes, the system relations teacher-teacher-student, quarter sectioned and Soviet lack of freedom.

Besides, most of today’s teachers studied during the Soviet era and are in the minds of the scoop, so I don’t even know when here comes the change…

What do you think about Soviet education? It was better then or now?