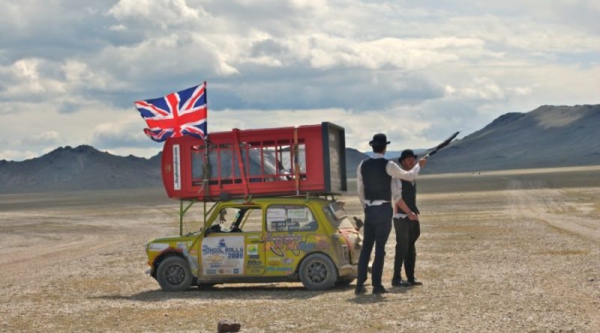 Lately more and more popularity among those who like to spend a car trip is gaining Mongol Rally.

The first such rally was organized by the Adventurists to raise funds, which was fully directed to charity.

Since then, the organizers of the race changed, however, the participants follow the tradition of fundraising for charity. To achieve this goal involves various kinds of sponsorship programs.
The essence of road trips is that participants move along the route in cars, engine capacity not exceeding 1l. the Route originates in Europe, usually in Prague, and guides participants to Mongolia, ending in Ulaan-Ude.

Routes tend to change every year, however its total length averages about ten thousand kilometers. The passage of these routes, participants spend about a month on average.

The organizers are not responsible for the safety of the participants with whom in the way anything can happen.For example, they can be robbed. In addition, cars tend to fail at the wrong time.