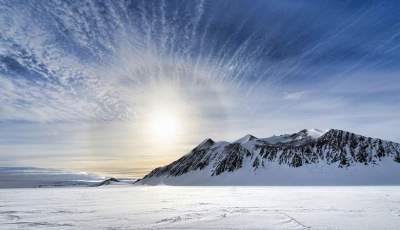 This cold temperature has not been observed on our planet.

According to the Americans, it is so cold that people can easily get frostbite and irreversible airway if it stays there for a few minutes. The previous record, amounting to minus 89 degrees was obtained in the same Antarctica in 1983 but now a high-tech NASA satellites has allowed to find on the South polar continent is still colder region.

But what are those stains? According to the American experts, we are talking about different hollows, fissures and other cavities in the ice shield, where the heavy frigid air settles in the absence of wind and moisture and is at the bottom of a day, even more when cooled down.

To finally confirm their data, the American climatologists are going to equip in East Antarctica a land-based expedition, which will examine all these holes. However, researchers first have to develop the technology of heated air for breathing, because, as mentioned above, such low temperatures fatal to humans.