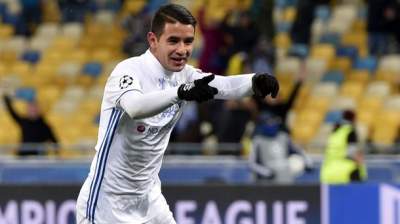 Paraguayan footballer “Dynamo” derlis Gonzalez will continue his career in the Brazilian Serie A.

Gonzalez, in an interview with “Gazeta Esportiva” confirmed an agreement with Santos a contract. Previously, the parties could not agree on the financial terms Gonzalez wanted to keep his salary in the “Dynamo” (110 thousand dollars a week), and Brazilians were offered the player about 70 thousand.

“The agreement with Santos achieved. Glad that I will be in this club. Want to get back on the field — missed football,” said the midfielder “Dynamo”.

Gonzalez will be the player of Santos on loan. Back followed by Brazilian midfielder Victor Bueno, of which Dynamo also take rent.

For Gonzalez Dynamo in July 2015 paid “Basel” more than 9 million euros. The Paraguayan following the departure of Andriy Yarmolenko predicted the status of the leader of the “white-blue”, but leave a noticeable mark on the capital club, he had failed.

Derlis Gonzalez in the “Dynamo” in all the tournaments played 85 matches on account of the Paraguayan player has 12 goals and 15 assists.