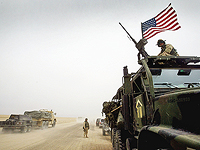 According to the Syrian radio station “sham FM”, us military convoy of 55 trucks entered the Syrian province of Hasaka with Iraq. Delivered to Syria armored vehicles, engineering equipment, military equipment, including residential caravans.

February 9, The Syrian Observatory for Human Rights said that the American military equip a military base in the city of al-Hasaka in Eastern Syria. However, she is created in the same place where was located the headquarters of the local Kurdish forces of self-defense.

According to SOHR, the arrangement of the database was launched on 26 January, when a convoy of U.S. military equipment arrived at the base of “tel-Baydar”. 9 Feb arrived 75 trucks. Over the base raised the American flag.

Recall: at the end of October 2019, the President of the United States Donald trump announced the withdrawal of American troops from Syria. “Let others fight over the bloodied Sands.” He also reported the discontinuance of its Kurdish allies, saying that they will take care of the President of Turkey Recep Tayyip Erdogan. Erdogan is the worst enemy of the Kurds.

Soon after it became known that the U.S. intends to retain control located in Syrian oil fields. We decided to leave the country several hundred American soldiers.