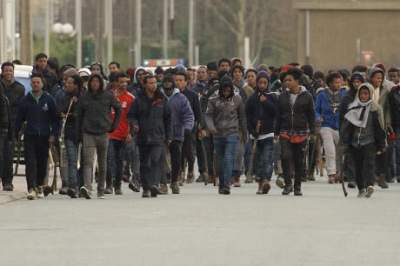 Five people are in serious condition.

Five migrants were shot and wounded in the French port city of Calais during the mass brawl between the Afghans and Eritreans. It is reported by Le Figaro.

The fight, which lasted nearly two hours, vspyhnula on the southern outskirts of the city where the migrants were standing in line for food.

For unknown reasons, the Afghans took a few shots, then started a fight in which participated about one hundred refugees from Eritrea, and about 30 Afghans.

Later, another fight broke out in the industrial area a few kilometers from the first incident. “The police intervened to protect the Afghan migrants, who were threatened 150-200 Eritrean migrants,” said the local Prefecture.

According to preliminary information, four Eritrean minors aged 16 to 18 years are in critical condition at a local hospital. Another victim in serious condition was sent to Lille.

At least 17 people were wounded with blows of iron bars.

The French interior Minister said that he would come here today, in Calais. “After a serious incidnet I arrive in Calais tonight to discuss the situation with the prefect and the mayor,” said Gerard Call.

Local charities report that in Calais live about 800 migrants, whereas the authorities say about 550-600 people.

We will remind, the President of France Emmanuel macron recently visited Calais and promised to prevent the recurrence of the situation which a few years ago happened in the port city around the camp migrants, known as “the jungle”.