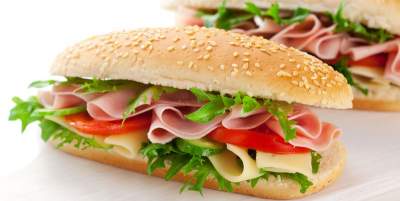 Researchers from the University of Manchester has calculated the amount of carbon footprint arising from the production of different types of sandwiches.

Researchers have estimated that the production of sandwiches in the UK every year leads to the release into the atmosphere quantities of carbon dioxide, comparable to emissions of 8.6 million vehicles.

The most harmful for the environment was high-calorie sandwich with egg, bacon and sausage. Manufacturing, packaging and disposal of the sandwich cost the planet in 1441 unit of carbon dioxide equivalents. The same amount of greenhouse gases throws the car in 19 kilometers.

Measurement of the carbon footprint allows you to estimate the amount of greenhouse gases that are emitted throughout the entire production cycle and use of the subject. In the case of the sandwiches the researchers took into account all stages of the preparation of the ingredients, including the cultivation of grain and vegetables, livestock breeding, fishing, and preparing the packaging. The researchers then estimated how much greenhouse gas is emitted during the storage and transportation of ingredients and ready-made sandwiches. In the last stage estimated waste volume and cost of export packing garbage.

The researchers analyzed 40 different types of sandwiches, dividing them into two large groups: prepared industrially or home. The average carbon footprint of homemade sandwiches was two times less than industrial analogues prepared according to the same recipe. The “trace” of ready-made sandwiches include the costs of transportation and storage powerful refrigerators, and the packaging adds about 8.5% of the load. The least harmful, researchers have called home-a sandwich with cheese and ham.

According to the researchers, this not only raises questions about the impact on the environment. Such studies allow to find points of the production chain, which emitted the most greenhouse gases and to optimise production to reduce the amount of pollutants. According to the British Association of producers of sandwiches, only in the UK every year eat more than 11.5 billion sandwiches. This leads to emissions of 9.5 million tons of carbon dioxide — the same amount of throw of 8.6 million vehicles. The finished sandwiches the British spend about 8 billion pounds a year.