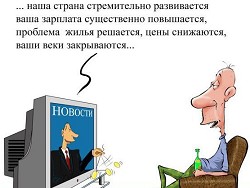 Information noise lulls people and deprives them of the desire to think. Councils “to throw out the idiot box” is meaningless.

My recent column on the controversial TV show “In fact”, suddenly caused a violent reaction from Russian public Internet. Especially among those who are proud of their indifference to the TV, but somehow very well informed about what they show.
Show more…

My favorite argument of such people: “do not like do not watch”. But the problem of duping of the population, which is engaged in TV, simply by pressing the buttons on the remote are not solved, telecentre thrives, its products are in great demand. While over the audience to conduct such horrific experiments that dismiss this “don’t look” tantamount to calling to hide your head in the sand.

During the existence of the “idiot box” has formed a huge reservoir inert, accustomed to the chaotic, easy, bright and spicy information to the audience. And the trouble is not that they follow the fate of Buzova or Shurygino, and that losing the ability to analyze and filter content, sometimes quite consciously immersed in the informational “white noise”. He is able to “lull” people of any age and level of development.

Judging by the comments in the Network, even the young audience, with all the seeming activity and self-sufficiency thinking, and consumes information on the principle of “fast food” without worrying about “the product”. Because most of those who liked the column about the show “In fact”, by default, decided that it was about “hype” on Shurygino and her men, not so long ago invited to the transfer — that is, critics had not even read the text. It is because of this superficial perception today is often tied “debates” on the Internet, laced with aggression and a complete inability to hear anyone but himself. So they are better than and more worthy of verbal wrestling that we see in political programs on Central TV channels?

Of course, you can’t watch any pseudo-Patriotic or pseudointellectuals programs or talk shows, which relished the sordid details of the next “star” of divorce or applause greeted paroled youngster, famous sex and drunk with a strange youngster. But it is important to understand why the producers of such shows turn inside out those goals and values that not long ago seemed unshakable, and everyone looks at it through his fingers. They will convince the viewer the next time someone exonerated, what sins released?

Meanwhile, our popular culture does not offer any quality alternatives literature, written in good style, films and TV series that penetrate the soul and make you reflect on the really important things, entertainment content, providing a pleasant leisure and give aesthetic pleasure, and not playing on the instincts and primitive sense of humor… There is, however, culture is “not for everyone”, focused in the art-clusters, time clubs, and theaters “without popcorn”, but customers are very few.

The majority remains immersed in the notorious “white noise” that distract from the gloomy thoughts about the increasingly dire state of the economy, the humiliating position of Russia in the world, alarming predictions about what will happen after the elections, when the authorities will no longer need to keep up.

The malignancy of this “noise” lies in the fact that he is, indeed, addictive. If we suddenly find ourselves in the ringing silence, not diluted nor exchanges regular “patriots” with regular “enemies of the people”, nor news in the spirit of “Donald trump forgot the words” or secular chronicle about another twine Volochkova, we become uncomfortable and creepy.

Consumption of information collection, among other things, serves as a kind of signal: once people are interested in such a meaningless and trivial news topics, so it’s not so bad — after all, when will be nothing there will be is clearly not to them. And finally, there is a risk to forget and to judge the well-being solely on the TV, not the refrigerator.

Although many inhabitants of the Internet today proudly say they do not know the “stars” of the TV, do not know discuss there “sensation,” and everything is some kind of alternate world for “cattle”, the stagnation in society and culture more eloquently than any telerating suggests that a program of brainwashing works successfully.

Only when something changes radically, when Russia becomes a truly modern European country — both culturally and economically — in the country will be independent and free from the influence of Roskultury the younger generation.