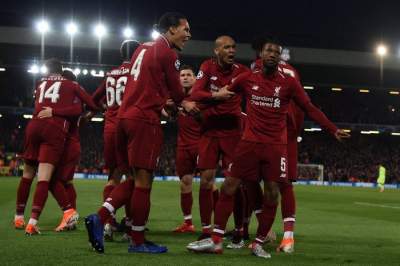 The British made a crazy comeback in the second semifinal match of the Champions League.

After 0:3 at the camp Nou Liverpool desperately needed a quick goal, and that goal for “the Reds” provided Original, which is already on the seventh minute effectively played on the rebound.

Before the break, Barcelona had some good chances to close the intrigue, but with the impact Coutinho managed Alisson and Messi a few times inaccurate shot from distance.

It seemed that the match is under the control of Barcelona, but things have drastically changed in the beginning of the second half. For some two minutes, Wijnaldum, substitute at halftime, scored twice and equalized the sum of the two meetings.

Barcelona only after a quarter of an hour after the second goal of the Dutchman came to. Again the chance to score was Messi, but Alisson dragged the strike leader of the Catalans.

The climax of the match was a clever corner kick from Alexander Arnold, who suddenly sent a ball into the penalty area, and quickly.
bearings and shot into the far corner.

The final 10 minutes “Barcelona” has not created any dangerous moment – “Liverpool” for the ninth time reached the final of the Champions League, and an opponent of the Reds will be Ajax or Tottenham.