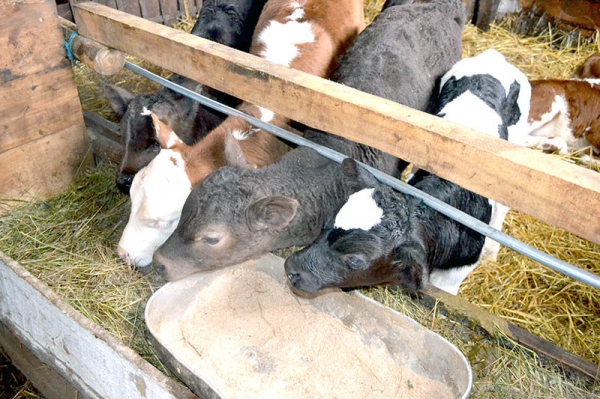 Abdujalil of Putilov, head of the farm “Zholaman” in the Turkestan region, of those who, having a solid economy and skillfully controlling them, dissatisfied with their current economic situation, but regularly pays to the Fund for financial support for loans to teach your children in universities, and four of them.

Under the animal farm, which he built between the hills, where once was the collective farm (from her, however, remained just useless Foundation and leads once laid a narrow road – the correspondent of IA “КазахЗерно.kz”), he picked a great place. The area is called Kakpak. Luxurious pastures, rocky mountain river with clean water, which to drink drive cattle, – all this can be called a stretch, of course – Alpine zone, which gives the village residents the opportunity to be successfully engaged in raising cattle. The bridge over the river, however, failed to get to the farm Pazylova, it is necessary to cross to the opposite shore by wading. But the meat Kakaka one of the best. Cattle gaining weight on lush grass, clean air, generous sun.

A. Putilov, accustomed to all the pleasures Kakaka says:

– I wish I had a million to equipment to buy. If you do not have advanced such a sum, it is necessary to collapse the economy. How to live? Need a lawn mower, you need a tractor. But they are not. And nothing to buy.

It million tenge, as I understand it, is not enough to Abdujalil to complete happiness. He utters a long tirade about how the lack of funds is strangling rural businesses. Spilling figures monthly expenses. They are just a nightmare. About profit word. It can only be guessed after long diplomatic talks. Watching credit Manager at Kazygurt district Askar Jurabekov, which came to the farmer. He smiled, did not object to the borrower of the Fund. And carefully listen to him. And then invites the elder to begin the story about the hard life from the beginning. And it is not so dramatic. Well, I want the farmer more than he has now! At once! The government should immediately frame him your financial shoulder.

It was set up. Moreover, it is very strong, – says Askar.

As it turned out in the course of further conversation, our farmer – A. Putilov in education, livestock breeder, started his independent livestock business under the state program “Sybaga” in 2013, with the farm dairy was 90 goals, with 60 acres of irrigated land, 500 acres of pasture in two places – around the farm and in the mountains. Still had room for cattle and a shepherd’s hut that he built with his own funds without any loans.

A new state program that was very interested in beginning farmer, involves the development of meat production, which is necessary to purchase calves for herd reproduction. Fund for financial support of agriculture has proposed the first tranche of a loan of one million 260 thousand for two years at six per cent per annum. The farmer arranged it and took the money, he purchased three bulls for breeding auliekolskoy breed. Then there was the second installment of “Sybaga” – 12 million 240 thousand tenge for seven years, all under the same six percent per annum for the purchase of 68 ewes cattle. The result of the cows with the bulls was the birth of about fifty heifers and bulls, part of which is characterized by pronounced exterior auliekolskoy breed.

– Since five years have passed, and now all the bulls I have aulaclty! – says a former livestock breeder farm “Kyzyl tan” A. Putilov.- And that, you know, a very substantial weight of each skotinku!

For the first tranche of Abdujalil already paid off. Although he complained that when he took in 2013, the credit bulls in the market cost more than when it’s time to pass on fattening their own calves. They say, if not for that, the profits could get much larger. But for the loan paid on time and filed for get another loan to buy new breeding bulls for reproduction of the herd. Two years later, A. Putilov will finish to pay the second tranche.

He gives a bulls for fattening on a dedicated platform. There is an agreement with the firm, which is engaged in fattening and cows and heifers – sold. After only one year, Abdujalil received from the state for the purchase of feed and for selective work more than half a million tenge of subsidies.

– Little – no stopping A. Putilov and begins to count the cost. Shepherd pay per month 70 thousand tenge (Askar Jurabekov says: the family of shepherds, not to everyone). – In the summer hired four people to graze cattle in the mountains, far from the shepherd’s house. And a lot of expenses.

He again starts talking about the million, which, in his opinion, to give for the purchase of equipment to those involved in farming under the program “Sybaga”. 60 hectares of irrigated land, with which it would be possible to obtain some benefit, says Pazylov, it is almost nothing. Planted last year, the barley, never watered, and collect the inning.

– Combine said, “Why mow if more than two quintals will not collect?”, – shares memories from Abdujalil. – I left on the vine. When barley zakolosilis, the birds came and ate most of the harvest. This year he sowed the land to alfalfa, and not the entire area.

– Once settle up with the loan, you can take your million for the purchase of equipment, – says Askar. – This is a government investment subsidy. It just covered part of the costs for the purchase of modern agricultural machinery. Just don’t overload yourself with credits, do the math first if you can with payments.

However, this A. Putilova can not be prevented. Accountant good he is. And a reasonable boss. Otherwise would have been unlikely to cope with such a large economy. And the fact that he wants more, so it’s good. And he, of course, will have the coveted technique. And then want something else. Well, right! Because if you do not set goals and not work towards it, then perhaps things will go uphill?