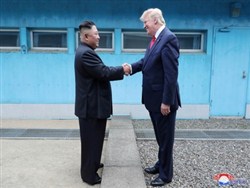 According to him, Kim sent him a “very kind” letter. In this North Korean leader had indicated that he wanted “to meet and begin negotiations, as soon as the joint military exercises the US and South Korea”. However, he complained of “ridiculous and expensive” military maneuvers.

“There was also a small apology for testing short-range missiles and the fact that the tests will stop when the exercises will be completed,” added trump.

The American leader has indicated that it is waiting for a meeting with Kim. He also believes that “North Korea free of nuclear weapons, will be one of the most successful countries in the world.”

Recent military exercises the US and South Korea began on 5 August. They can last up to 20 Aug, notes TASS.