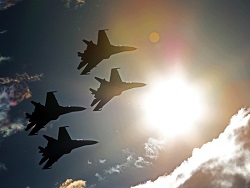 If we allow for the possibility of aggravation of Russian-Ukrainian geopolitical disagreements to an extreme variant – to open military confrontation, then the chances of Kiev is not much. Rather, they simply do not, told local media that a former employee of the foreign Ministry of the country. According to him, even targeted aid Washington will be of little use in this conflict. “Javelin” against Russian aircraft – nothing.

Former speaker of the Ukrainian foreign Ministry and now a political scientist Oleg Voloshin said that in the case of Russia’s use of the army of Ukraine will not last long and almost nothing can not do.

Talking about anti-tank missile systems Javelin that the US going for a long time and was almost going to put the expert noted that modern war is primarily conducted by air. What is the Russian air force, and Kiev and all the rest could watch live in Syria.

“It will not save from the Russian strategic aircraft, cruise missiles, bombings and so on,” the political analyst said the TV channel “112 Ukraine”.

He added that “the war with Russia, with all the power of the Russian army, we’ll lose within a week max.”

In the Ukrainian armed forces are encouraged by the promises of the Americans to put the “Javelin”. However, experts note that even from the point of view of warfare in the Donbass these ATRA are not too effective. As stated in an interview with “MK” expert Ilya Kramnik, declared a reserve of 210 missiles is sufficient only to prepare the operators of the systems, but to apply the “Javelin” in battle, need more missiles