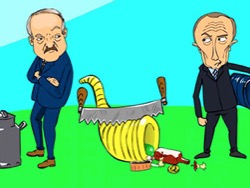 Belarus must be prepared for the fact that in the coming years the deterioration in the terms of Russian oil supplies, which will affect the prospects for exports and domestic consumption.

This is one of the conclusions made by the Director of the IPM Research center Alexander Cubricon according to the study “oil as a driver of economic growth: assessment of demand-side”.

Important decisions were not taken because of unwarranted optimism

As told Alexander in an interview chuta Thinktanks.by “estimates show that the contribution of oil to real GDP growth in the medium term is equal to zero. Thus in certain periods of oil and oil products had a significant impact on economic growth. At the end of 2011 and the first half of 2012, high growth rates of imports of oil and large volumes of re-export of oil products provided growth of GDP. At that time, the economy is very heavily restored after the crisis, and no one expected growth, but GDP grew by more than 3% by oil and oil products, including through re-export schemes, which Russia then closed his eyes. This situation illustrates how the dynamics of the Belarusian GDP vulnerable to changes in political relations with Russia.”

Over the last decade Belarus has repeatedly faced with a decline in GDP, and economic power began to seriously discuss the possibility of reform. “However, during these periods, Russia gave us relief in terms of oil supplies and re-export schemes. This allowed us to grow without reforms, albeit very short period of time. But this growth period was enough to make the important decisions were not taken on the background of unwarranted optimism. Economic policy still remains vulnerable to such manipulation,” – said Alexander chuta.

Further incentives for oil and oil products will not only depend on political factors. In the coming years, Russia needs to end tax maneuver, which will bring to the world price, domestic prices and prices on oil supplies to Belarus. “In 2008-2012 Moscow saw Russian refineries have an incentive to sell their products via Belarus evading the payment of duties. The decision was made to begin reducing the export duty while raising the tax on oil production. When this tax maneuver is complete, the domestic price of oil and the price of oil for Belarus will come close to the world price,” said Alexander chuta.

The rise in the price of oil would deprive the Belarusian side advantages in the export of petroleum products. On the profit opportunities in this area will have a big impact transport costs. “Belarus will be profitable to deliver oil products only in the neighbouring countries – Ukraine, Lithuania, Latvia, Poland. So, exports can greatly be reduced by about a third compared to the “Golden times”, – says Alexander chuta.

In order to prevent the fall in exports of petroleum products in Europe, it is necessary to revise the range of products produced by Belarusian refineries and refocus on the most modern and popular in the European countries products.

The expert also noted that today receive cheap oil from Russia gives you the opportunity to maintain low prices for petroleum products on the domestic market. And quite a significant part of them is exported for resale abroad by private individuals. In the case of growth of price of Russian oil domestic prices of petroleum products will also have to promote that will make senseless cross-border trade. This, as the immediate price increases, will significantly reduce domestic consumption of petroleum products. “The imminent increase in prices for Russian oil will become a serious challenge for the internal market, which was accustomed to low fuel prices,” said chuta.

We must remember that subsidies will end

The expert said that the oil subsidies has been steadily declining the last 15 years. Today the share of oil products in the structure of exports is much lower than it was at the peak of benefits, when it reached almost 40%. Today, the export of petroleum products only slightly exceeds the export of food products. “Count on the fact that oil benefits will be unwarranted optimism”, – said Alexander chuta.

“If the current situation just continue to use the oil subsidy, enjoying an influx of money, there is a risk that all this will end in a time when the money is needed most. It will be painful for the budget, both for the economy and for people. To protect yourself, you need to rely on the oil trade as a source of productive investment enterprises, is to spend money on modernization of its refineries, debt and save the excess. Need maximum transparency of the entire oil trade to the statistics, it was clear that we sell the products at the best prices possible, without intermediaries, and that all the money from the sales coming in Belarus. Also needed a road map of transition to market prices for the domestic market, which will need to implement as soon as Russia will complete your tax maneuver”, – said Alexander chuta.