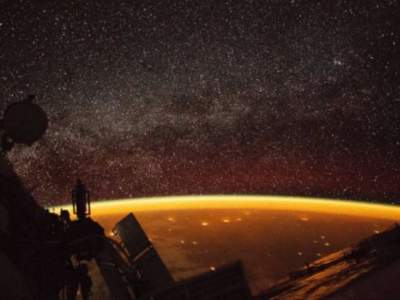 NASA explained how he formed a strange glow.

Wednesday, November 7, the U.S. space Agency has published the unique footage made by one astronaut.

As noted in the comments to the photo, amazing glow managed to photograph the ISS, which is “hung” over Australia at the height of four hundred kilometres.

NASA explained how he formed a strange glow. Thus, such light occurs during the reaction of molecules of nitrogen and oxygen on the ultraviolet radiation emitted by the sun. For energy release is a collision of atoms in the lower atmosphere. When the energy is released, a glow, which is visible in the picture.

The phenomenon will allow experts to better see the connections between the earth particles and space, as well as to study the patterns of weather on earth and in space.

Luminescence billions of times fainter than sunlight, so it can be seen only at night. The glow can “reach” up to 640 kilometers. Tinge phenomenon can be different, for example, two years ago, Miguel Claro photographed the iridescent glow over the Azores in Portugal. On the attached photo it is predominantly orange.