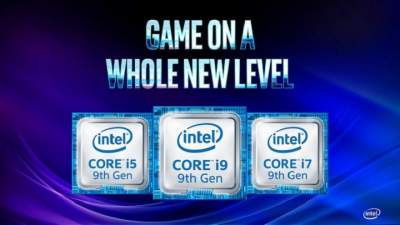 A fresh solution of the H-series will debut in the next quarter, however, the composition of the new family of CPU chip maker, yet chose not to disclose.

It was announced that the laptop Core processors, the 9th generation have a 45-watt TDP, and devices based on them will receive a wireless module Intel Wi-Fi 6 AX200 (Wi-Fi 802.11 ax), Thunderbolt 3, and also can be equipped with storage Memory Optane H10.

According to reports, the head of a new family of mobile chips will be 8-core Core i9-9980HK running at Turbo Boost frequency up to 5 GHz. Preliminary list of innovations is available here.

Intel Graphics Command Center (IGCC) is a first update control panel Intel graphics for the last five years. According to the chip maker, the app was developed based on user feedback and functionality comparable to those from leading developers of discrete videoder.

To date, IGCC supports integrated graphics architecture Gen 9 used since the processors Skylake Core (6th gen), or newer and is available only in the Windows version 10 (edition of 1709). Download Intel Graphics Command Center in the digital Microsoft store.