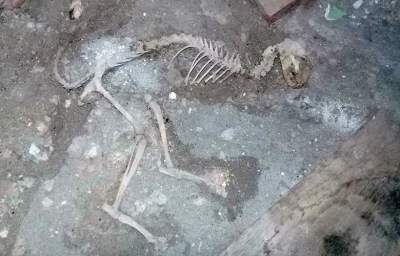 The form of a creature not identified.

Resident of the village of Yangiyul in the Fergana region of Uzbekistan was accidentally discovered during a recent home renovation the skeleton of a strange animal similar to a dinosaur.

The creature, apparently, had an elongated flexible neck, the massive hind legs and long tail, but the front paws had somehow not noticeable. The man took a picture of the skeleton of the mysterious animal and compared it with photographs of the bones of prehistoric dinosaurs on the Internet, but not found any matches.

The house, under the floor of which remains, was built in 1969 during the development of steppe zones of the region. The buildings were built without foundations, so it is possible that the skeleton remained in the ground without any significant damage.

Local journalists write that the purpose of the establishment of truth author finds should invite to the study of archaeologists or of cryptozoology, however, the villager believes that all is empty: it is neither the time nor the means. Apparently, this mystery will remain a mystery, unless, of course, any scientist happen to be interested in such an amazing find.

The Internet users remembered on this occasion, even about the Chupacabra – it might be the skeleton’s left of her? However, in the village of Yangiyul about the mysterious predator no one has ever heard, and even legends about it does not exist, so the appearance of local “goat vampire”, even in the past, is unlikely. In addition, the skeleton of the alleged Chupacabra, apparently, scientists may be interested in even less than the alleged skeleton of a dinosaur…