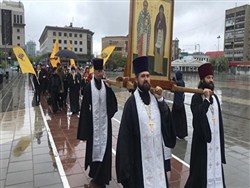 Was established in Tyumen children’s organization “Orlyata”, said Znak.com the head of the Tyumen branch of the society “double-Headed eagle”, the former Deputy Gordumy and the owner of the “Russian jewelry network” Igor Raksha. In the companies yesterday received seven people. “These are children who still may want to learn the history, historical values, you can do research and learn about the history and traditions of our state,” said Raksha Znak.com.

The channel “Tsargrad” says on its website that ties with a double-headed eagle, the children were tied on 24 may, the Metropolitan of Tobolsk and Tyumen Dimitry, who has blessed the undertaking. The first thing “the eagles” held a procession in honor of the feast of saints Cyril and Methodius and the day of Slavic writing and culture. Activists have suggested to make the organization “Orlyata” Russia.

While in conversation with the correspondent Znak.com Raksha said that children in motion “Eaglet” will not engage in religion, and will focus on history, as well as “mercy and compassion”. To do this, they will visit the orphanage. “We have no purpose to introduce children to Orthodoxy. All religions are the place to be. Our main goal is the story. We have museums, historical Park “Russia — my story”, a lot of historical sites in the city that have been lost, forgotten, renamed. And most of the lost history of our region is the period before 1917. We have a period of Ermak even more studied,” — said the former MP.

He also noted that the move “will not be of officials and deputies.”

Raksha suggested that “Eaglets” can become a response to the recent protests against the construction of the temple in the square in Yekaterinburg. “Young people just got game. Large permissiveness, all of them can be. Maybe it’s time to create organizations that on other values work,” said Raksha.