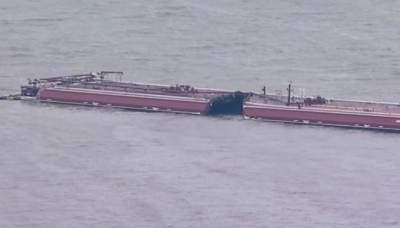 In the United States has faced a tanker barges

Marine tanker collided with a towboat and barges in the transport channel in the vicinity of the American city of Houston, Texas, resulting in a leak of petroleum products.

At the scene are works on liquidation of consequences of the Fukushima disaster, said on Saturday the us TV channel ABC News.

“The collision of heavy tankers with two oil barges resulted in the leak of tens of thousands of gallons of gasoline product into the transport channel in the vicinity of Houston city”, – stated in the message.

The U.S. coast guard confirmed the fact of accident on the water, which occurred in the Houston Ship channel, Texas. As specified in the service 230-foot tanker collided with a tugboat that was pushing two barges filled with about 90 tons of reformed each. One barge overturned, the other was significantly damaged. No injuries were reported.

The reformatting is a product of an intermediate stage in the production of gasoline and is a colorless flammable and toxic substance. According to local authorities, not yet established exactly how much of the substance leaked into the water, however, noted the presence of large oil spills on water and pungent smell.

Sea channel is closed for the movement in the area of the accident. On the site of the incident are the ship and the helicopter of the U.S. Coast guard.