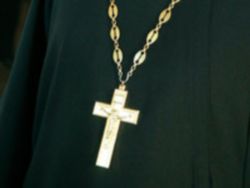 Pskov 38-year-old Orthodox priest Sergius (Ivanov), who was previously convicted of trafficking drugs and weapons, returned to his spiritual duties. Minister to the flock he was blessed by the Metropolitan of Pskov and Porkhov Eusebius, according to “MBH media”.

According to the news Agency, in early 2018 Serge came out of the village gate and asked the Metropolitan Eusebius with the request to allow him to return to Ministry in Pskov. The head of the diocese, according to a source in the Church leadership of the region, said that the objection is not. The Bishop put the priest as the only prerequisite to pick out the temple and to persuade the Abbot to allow him to do – to be second priest in the Church.

As follows from the materials of the criminal case, which was heard in court two years ago, my father Sergius “any criminal intent on the illegal acquisition, storage without a sales objective of narcotic drugs in large size”. Then the clergyman found near the entrance at the Riga Avenue in Pskov “substance, containing in its composition narcotic drug methamphetamine, total weight 19.82 grams,” which brought home and put in the fridge. The court characterized this as “deliberate illegal acquisition”, but felt that to sell meth clergyman was not planned.

It had some justification. According to the Pskov regional narcological dispensary, Archpriest Sergei Ivanov suffered from addiction and needed treatment.

As follows from the materials of the case, after some time, “criminal intent” re-visited a Russian Orthodox Church priest: father Sergius came out of the house and again found on the street something is prohibited – this time the Providence of God “planted” him the gun Margolin with the 65th combat rounds in a gray bag. Production spiritual mentor brought home and put on the top shelf of the Cabinet.

According to “MBH” media weapon Serge could “find” not quite by accident: as the parishioners, he often told them about his brother, who allegedly is a major crime boss.

Detained “the priest with criminal connections” FSB. They are also found during the search and seized banned substances and items, including muffler for a gun. The court has considered criminal case in a special manner, because the priest admitted his guilt and repented.

Russian Themis took into account as mitigating circumstances the presence of the clergyman “social ties, steady employment, willingness and ability to continue to work”. Also take into account that “he has a dependent minor child and exclusively positively characterized”.

For serious crimes and srednetjazheloe rector of Holy Myrrhbearers father Sergius was sentenced December 14, 2016 for three years and three months imprisonment and a fine of 15 thousand rubles.

The convict continued to lead the Church, to confess and give communion to people until early January 2017 when the Metropolitan, tired of the constant queries of journalists, tacitly forbidden in the service for three years. After that, Serge went to the local village.

In April 2017 he had to deal with the Pskov court, upon request of the Prosecutor deprived him of his right to drive. In court, the public Prosecutor of Pskov Alexander Grigoriev referred to the fact that Archpriest Sergius (Smith) standing on the account in a regional narcological clinic.

Note that the head of the Pskov diocese Metropolitan Eusebius tried to protect his lost ward. After the appearance of publications in the press about a priest with a criminal past Eusebius accused the journalists of libel.

“In the last days and I have to test it, the enemy Satan works through people. Our venerable father, the rector of the Church of the Holy myrrh-bearers, the priest Sergius Ivanov, now written a dirty article, supposedly he had a gun and drugs. Don’t believe it! Can not combine the priestly heart, and that, and another, and talk about the true God, and of the Holy righteous life, and to perform the Sacraments,” the Metropolitan said in public preaching. He also threatened to mortals punishments slanderers, attacking the Church and “clergy.”

Meanwhile, the “slandered” not only journalists, but also workers of justice. Pskov city court until recently did not want to officially comment on the details of the case, but 27 Jan 2017 posted on its website the text of the sentence, read by Archpriest Serge Ivanov.