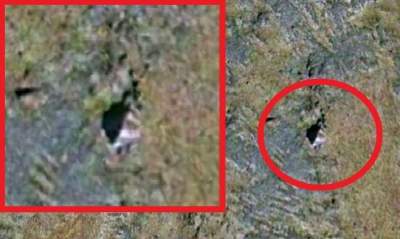 Nizhny Tagil conspiracy theorist and researcher of the death of tourists Dyatlov Valentin Degterev shared with readers of his blog a new a curious discovery. According to Internet journalist, he managed to find on satellite images of the legendary tract of something that looks suspiciously like a large pyramid. The coordinates of the potentially sensational discoveries of the Russians are: 61.988230°, 59.507525°.

The researcher reported that various mysteries of nature and mysterious anomalies are found everywhere in the Northern Urals. Even there, where ever there are tourists, you can find anything unusual. Valentine used the popular map service “Google Earth” to review the Dyatlov Pass and the surrounding area from the height of bird flight. 26 kilometres North-West of the infamous place where the lost Soviet city, a large mountain, and on it a strange symmetrical object pyramidal shape.

The height of the intended building is about 13-14 meters. Possible pyramid strikingly stands out against the mountains and looks like a man-made object, and executed very skillfully. Degterev is not willing to say this with absolute certainty, however, the expert believes that it in fact is about the structure, made of a rare marble or any other breed that are not found in the Northern Urals.

The author of the finding goes further and suggests that we have before us an ancient artifact that is directly related to the Mansi sacred mountain Kholat syakhl. Maybe he was or even still is the subject of worship Voguls. Degterev doubt that such a complex structure could be erected Mansiysk, as it would require complex machinery. Maybe it was the representatives of extraterrestrial civilizations?..