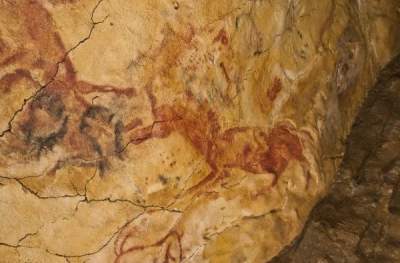 Researchers have found four paintings, one of which was made about 30 thousand years ago. This is perhaps one of the most ancient examples of prehistoric art in the world.

To clarify the outlines of the drawings and to determine their age, a team of scientists from the Museum of history of Cantabria used the most modern methods.

About the possible location of ancient cave paintings, scientists told cavers. However, the picture of the prehistoric artists are so damaged by the time that they are difficult to see with the naked eye. The researchers used 3D laser method of viewing to see the original beauty of the rock masterpiece on the computer.

“These technologies allow us to perceive colors outside the visible spectrum (from infrared to ultraviolet), so we can look at the pictures, hard to see eye”, — said the head of the team of archaeologists.

The age of these petroglyphs are about 30 thousand — 20 thousand years. They are older than the UNESCO outline of a Buffalo in the nearby cave of Altamira. Although not as old as picturesque specimens in the cave of El Castillo, by the age of 40 thousand years.