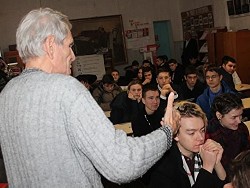 Administration of Yeisk (Krasnodar region) has banned to provide facilities for the game “What? Where? When?” which brings together talented Teens and children. This was reported by the local organiser of the intellectual contest, MP and member of the party “Yabloko” Alexander Korovinii. According to him, the refusal of the officials explained his political position.

“For the first time in 10 years the district administration has banned the game “What? Where? When?” the youth club “Camelot”. Categorically forbidden to give us the room. Explained that my opposing views and the fact that I am a member of the Yabloko party, not United Russia. Although never at the games or training policies have not been,” — said Korovinii edition of the “Voice of Kuban”.

Simultaneous international tournament on game “What? Where? When?” — “Azov breeze” — were to be held on January 21. After the officials denied to provide the room, the owners of alternative venues at the last moment refused to cooperate with the organizer.

“The event was on the verge of collapse, this is one of the largest and most interesting of simultaneous tournaments for high school students, along with us, plays more than a hundred cities from around the world, and it turns out — the whole world plays, and Eisk will not be able to win this tournament,” added the opposition leader.

As a result, the room provided the Yeisk branch of the Communist party, reported on his page in Facebook the other local MP Alexander Baturinets. The children were invited into the auditorium office of the Communists in the streets of the World. “During the solemn opening of the game, the word was given to me. I asked for the power of forgiveness… And then, adults who were at the game, got a shock! Interrupting the game, several teams were forced to leave the premises. Their care, they explained that they are on the phone with schools threatened not to give the medals to which they were so long…. writes Baturinets (spelling and punctuation preserved — approx. ed.). — Sure, no problem, we also have advised them, if such a thing is not to take risks, to leave… But they admitted that at the exit from office of the Communist party of shoot photo and video equipment. I went out with two vehicles shooting released children!” It was later revealed that the children were shot with an employee of the Department of education Yeisk district, said the Deputy.

In this situation Korovinii intends to write a complaint to the International Association of clubs “What? Where? When?” the Governor of Kuban, and the administration of the President of the Russian Federation.

Note that the party member “the Apple” part-time member of the Council “Ecological Watch for Northern Caucasus”, “Camelot”, he manages about ten years. After Korovinii took part in protests Alexei Navalny 12 June 2017, he was dismissed from the local school and arrested for 10 days.