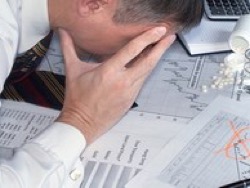 Following the first wave of bankruptcies in the peak of the crisis in 2014 coming second wave: many markets have shrunk for three years in 1,5-2 times, and the company managed to exhaust the margin.

Center for macroeconomic analysis and short-term forecasting (CMASF) published a report on trends in bankruptcies of legal entities in Russia. These trends are not encouraging – the number of bankruptcies has increased for the third consecutive quarter. Thus, in the second quarter of this year, went bankrupt by 2.8% more companies than in the first quarter. In comparison with 2007, the intensity of bankruptcies increased by 300%!

The worst situation in trade, commercial services and construction: these three sectors account for 80% of all bankruptcies.

In the previous year, the level of bankruptcies in the retail trade was quite high. Retailers then made up almost half of all bankruptcies, so the current growth of 2.5% seems frivolous. The turnover of food products falls, the 12th quarter in a row (!) – since the third quarter of 2014.

That is eating the citizens every year more and less. Hence the increase in bankruptcies among farmers. To implement domestic eggs, meat and milk becomes just a nobody – for the population to procure food has become an unaffordable luxury.

As the authors of the report, widely publicized “the effect of import substitution” allowed the farms to stay afloat just two and a half years – from mid-2014 until the beginning of 2017, the number of farmers bankrupt has steadily decreased.

Thus, the farmers amid the General disaster stood aloof. However, their prosperity did not last long. This year bankruptcy in agriculture also started to growth, as in all other industries. Only for the second quarter of this year declared itself the bankrupt 152 agricultural company, which is almost 4% more than in the first quarter. 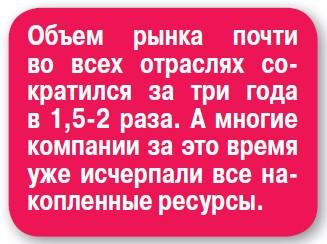 The report also established that the stop of growth of volumes of production of agricultural products.

A sharp jump in bankruptcies has been recorded even in such prosperous industries as power generation and metallurgy. In the electricity sector, the increase in bankruptcies was 15.6% and in industry – and at 64.3 percent compared to the same period last year.

8-10% suffered food industry and mechanical engineering. Only in the financial sector the number of bankruptcies decreased by 7.8%.

As for the geography of bankruptcies, the largest bankrupt (as a percentage of the existing legal entities in the region) in the Amur region. In second place – Tambov oblast, the third – Volgograd on the fourth Vologda, on the fifth – the Republic of Mordovia.

Least likely to go bankrupt in the Republic of Tuva. In the second place from the end of the Jewish Autonomous oblast, the third – > fourth – Belgorod oblast, the fifth – Dagestan.

As the authors of the report, the cause of insolvency – falling real incomes, reducing consumer demand.

The first wave of bankruptcies occurred during the second half of 2014. Now entering its second wave. And if in the first wave covered companies have no margin of safety, now sometimes it is about these industrial giants that until 2014 not only confidently kept afloat, but also showed a good rate of return.

How long will the second wave of bankruptcies is unknown. Save the situation can improve macroeconomic conditions and return to pre-crisis situation, as it was in 2009. However, such a return is called, and does not smell.

The crisis seems to have arrived in Russia for a long time, the market volume in almost all sectors declined for three years in 1,5-2 times. And many companies during this time, have exhausted all accumulated resources. As a result, as experts predict, the current and next year for many could be fatal.