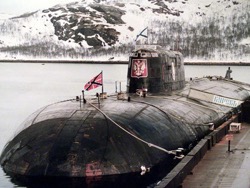 Head of Department of forward planning concern “Gidropribor” Gleb Tikhonov said that no country in the world still does not have the analogue of the Soviet torpedo 65-76A caliber 650 millimeters. The interview with him was shown in the edition of “Military acceptance” on the TV channel “Zvezda”, which is dedicated to the submarines of project 971 “Pike-B”.

“One product can sink an aircraft carrier,” — said Tikhonov.

He added that “this set includes three torpedoes, one device of sonar countermeasures.” What torpedoes Tikhonov had in mind, not specified — this statement followed the narration text with regard to the submarine project “Pike-B” are completely different ammunition.

According to open sources, the Russian Navy has 11 of these submarines. In the ranks are only four (“Panther”, “Tiger”, “Cheetah” and “Kuzbass”), six repair, one in reserve.

The 65-76 torpedo was developed by the enterprise “Gidropribor” in 1960-1970-ies. Its upgraded version, the 65-76A, adopted in 1991, and then began its mass production. Fire these torpedoes was carried out, in particular, with submarines of projects 945 “Barracuda” (later this project became the basis for “Pike-B”) and 949A “Antey”.

Representative recent project is the submarine K-141 “Kursk” sank 12 August 2000 during exercises in the Barents sea. Then killed 118 sailors. According to the official report prepared by the Prosecutor General Vladimir Ustinov, to the death of the cruiser resulted in the explosion of a training torpedo 65-76A occurred due to leakage of the propellant components of the ammunition. Emerged after the explosion of a fire triggered the detonation of other torpedoes in the first compartment and the further destruction of several compartments.

In February 2002, “Russian service Bi-bi-si” reported, citing former Minister of industry, science and technologies Ilya Klebanov, the command of the Russian Navy decided to retire the torpedo family 65-76. Vladimir Kuroyedov, at that time commander of the Russian Navy, said that confidence in the leaders of the Navy, who took these torpedoes for service, was unjustified; the “Gidropribor” with the findings of the Prosecutor General partially agreed. Information about the return of this ammunition service in the open access could not be found.