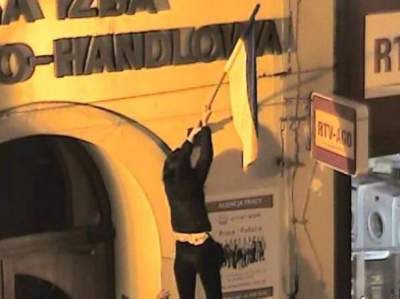 The court fined the three young people, who in September of last year on the Market square of the Polish city Swidnica removed the Ukrainian flag, trampled it and wiped his shoes

It is noted that in September last year, the camera of the municipal guards on świdnicka street market Square recorded three young people who were removed from the home of the Ukrainian flag. It hung over the entrance to the Student of industrial chamber of Commerce employment Agency Smart Work, whose office is located in that building.

The record shows, as the girl climbed on the shoulders of the guy and took the flag. Then they went with him into the street Frantishkansky where two people were trampled and wiping the flag on his shoes.

Municipal guards detained the company on the spot and called the police, and on its website reported that it was “made public outrage, destroyed and damaged” flag, and the detainees are suspected of committing one of the articles of the Polish Penal code. According to her, “whoever on the territory of Poland humiliates, destroys, damages or removes one of the state symbols of foreign States, established in public office of this state or by order of the Polish authority”, punishable by a fine, restriction of liberty or deprivation of liberty for up to one year.“

However, the police in świdnica put forward by the detainee on charges of “theft and destruction of property”. The police said that on the flag is not mutilated, they hanged him as a private firm, not the government or the authority.