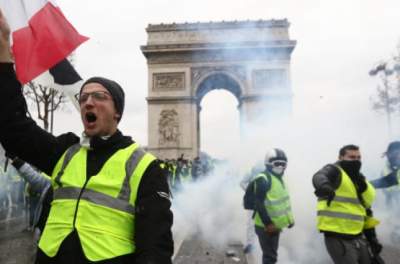 Minor clashes have also been recorded during protests in Marseille and Lyon.

In Paris on Saturday, held on 11 March “yellow jackets.” Activists in addition to the daily promotions that gather fewer and fewer people, announced the holding of “night of the yellow jackets.” Meanwhile, daily protests again marked by clashes with police and arrests.

According to Reuters, a column of protesters headed toward the place de La Bastille, where approaching the police, protesters started to throw a smoke bombs, in response police used tear gas and water cannons.

It is reported that police arrested 226 people. All day the pickets were 22 thousand people.

As reported, last Saturday the protesters pelted police with firecrackers and rocks.

The French government said that the protest movement of the “yellow jackets”, which was marked by the capture of state property, mass collisions with police and pogroms, receives support from abroad.