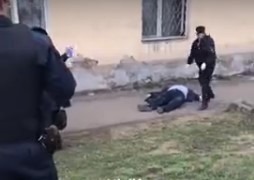 In Novokuznetsk opened a criminal case on the murder of 17-year-old. He shot in the head by unknown in the mask directly on the street, then took the shell casing from the crime scene and disappeared. This is stated on the website of the Kemerovo Department of the Investigative Committee.

According to preliminary data, in the afternoon of April 24, the young man went to a public transport stop in the streets of Zyryanovsk in the Ordzhonikidzevsky district of the city. “From the back and ran up the unknown masked man and fired a shot. Then he picked up the shell casing and the crime scene disappeared. Eyewitnesses called the investigative group”, — reported in Department.

Now detectives are searching for the killer. The source of the local channel “NC.Life” says the teenager could have killed by mistake, confusing with the other person.