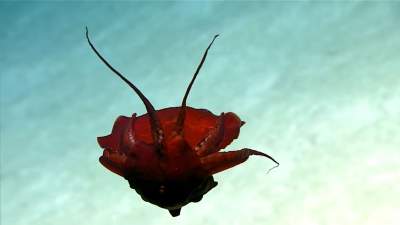 National Geographic has informed its readers about an interesting discovery of a group of scientists Okeanos Explorer, which discovered an unknown creating in the Gulf of Mexico. The primary study did not allow to identify the creating.

As noted by experts, a strange creature in appearance is a cross between a jellyfish, Nautilus and squid, but it has one difference — color, it is dark red, close to Burgundy.

Sarah Makenete shared his impressions: “a Creature similar to squid, but with uncharacteristic for mollusk color, moved like a Nautilus. This moment, as well as a special appearance struck me to the core”.

The experts were able to make detailed images of sea creatures using remote submarine with camera. Scientists soon plan to study in detail the creation, not only to determine what species it belongs, but also to find out some of the features being, for example, whether it glows in the dark.