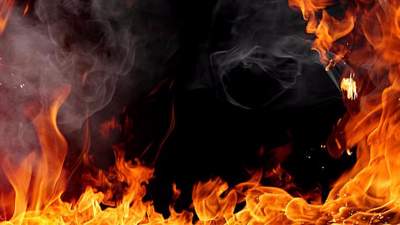 The river has dried up for no apparent reason, and on its bottom there were the flames.

In the small town of Nnewi in Nigeria, some time ago the river dried up, and today, in line with its visible flame. Moreover, the area started as a strange smell — a smell similar to hydrogen sulfide.

When the water left the territory and started the fire, people decided that someone has put something on fire. Locals tried to extinguish the flames, but it appeared in other places. This is not a joke all scared. Not only that, the river dried up, and the earth began to burn.

Where did the gas ignited and why it is a great mystery. But a month ago was flowing river, even had a small waterfall.

The scientists who arrived to study the problem, was also unable to determine anything. According to their theory, changes can be associated with a tectonic fault, which is currently actively being formed.

People experts are advised to drink more milk, to not be poisoned by toxic gases. Local residents believe that the disappearance of the river and the Flammability of the soil is a curse.