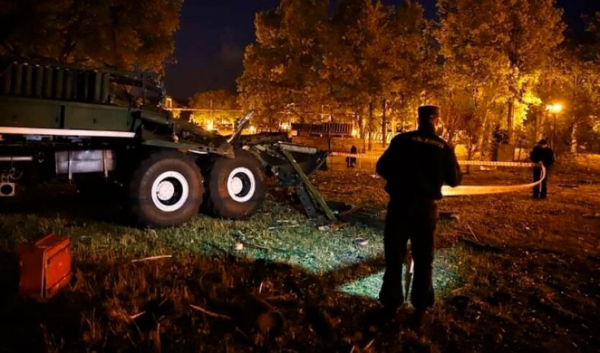 During the festive salute on Independence Day in Minsk on the evening of 3 July 2019, there was an emergency. A woman died, there are victims. The incident was reported eyewitnesses in social networks. The investigative Committee and the Ministry of defense confirmed the information about the incident.

3 July during the fireworks on the river Bank of Svisloch near the Stela “Minsk — hero city” was an emergency. Eyewitnesses reported two claps, which occurred near the earth, and unusually bright explosion. The blast had shattered Windows in some houses on the street daumana and Chervyakova. Later it became known that as a result of an incident whose causes are established, killed 64-year-old woman — already data confirmed that the metal fragment hit her in the neck. Several people were injured.

The investigative Committee opened a criminal case on the fact of explosion of the fireworks in Minsk. About it reports a press-Department service.

“According to investigators, on 3 July during the fireworks in Minsk there were four explosions of the fireworks. As a result, destroyed firing sets, a scattering of splinters caused injuries to at least 10 citizens. One woman, despite promptly received medical assistance, died on the scene. In addition, damaged buildings nearby,” — said in the message.

The criminal case was initiated under part 2 of article 463 (Violation of rules for handling with substances and subjects representing increased danger to others) of the Criminal code of Belarus.

Currently held urgent investigative actions. Work continues at the scene, seized the technical documentation related to the operation of firing installations and fireworks. Question witnesses, including military personnel, to carry out the loading, and the staff of the supplier of the fireworks. Appointed expert studies. The investigation is ongoing.

Commission of the Ministry of defence continues an official investigation into the explosions of fireworks in Minsk. About it reports a press-Department service.

“It is established that undermined the product of the same size (195 mm) of the five used in the course of the fireworks (105 mm, 125 mm, 150 mm, 195 mm, 310 mm). The explosions occurred in three of the six locations, where he made the salute. After the first explosions of fireworks in these areas was stopped”, — stated in the message.

The presumable cause of the explosions — not charges of this size (195 mm). The investigative Committee also proposed and practiced other possible versions of what happened.

It is established that all regulated by normative documents of safety measures have been complied with. The military calculations of the firing units were trained and were allowed to conduct fireworks relevant orders.

To exclude the “human factor” (bad maintenance of the installations and products) as part of objective control was filming the process of loading salyutnykh of installations.

During the salute had put a cordon in accordance with the regulations governing the use of these fireworks, with the appropriate certificates of the manufacturer (firing sets and fireworks yourself products purchased in Russian JSC “Pyro-Ross”).

“Considering that similar explosions in the preceding period was not recorded, occurred a tragic event, unfortunately, it was difficult to calculate. This is a rare case. The military expressed condolences to the families of the deceased and provides them with necessary assistance”, — noted in the Ministry of defence.