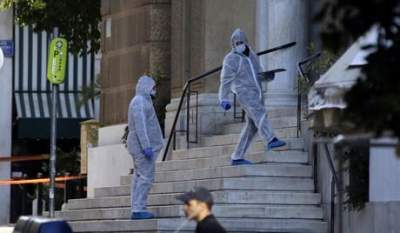 Father Simeon Voliotis, assistant to the Archbishop, said the caretaker found an explosive device at the main entrance to the Church, moved it to a nearby Parking lot and alerted the police.

“We were impressed by the fact that the bomb was left without warning. The service was supposed to start at 7:30, but people often come early to light the candle,” said father George

The explosion has caused great concern of the authorities as the explosion occurred without warning and in one of the liveliest areas of the capital of Greece.

The police said that the device exploded near the Orthodox Church of Saint Dionysius the Areopagite in the prestigious district of the capital Kolonaki before the Christmas festive service dedicated to St. Stephen.

Two of the victims were hospitalized. None of the men have injuries that are life-threatening. According to police and Church officials, the explosion caused minimal damage.

It should be noted that police officers of Greece are in emergency mode alert after a bomb explosion on 17 December near the private TV station sky, where the explosion is, fortunately, only damaged the facade of the building.