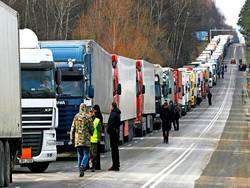 The cause of the incident in the car Park near Munich, was the fact that the Ukrainian truck drivers refused to drink vodka at the request of the poles.

In the suburbs of Munich for Ukrainian drivers was attacked by a drunken Polish truck drivers. As a result of the incident, the men received injuries of varying severity, one of them was hospitalized. About it on Wednesday, June 24, writes Suddeutsche Zeitung.

According to the newspaper, two Ukrainians 47 and 60 years of vacationing on the bench when they were approached by a drunken trucker from Poland and was offered a drink of vodka. Having been refused, the man beat colleagues with an iron bar. The Ukrainians tried to shelter in their cars, however to the aid of the poles came his compatriot. Together they pulled one Ukrainian out of his truck and kicked and tried to strangle it with a towel.

Fighting came several police cars, the attackers were detained. Later, at the request of the Prosecutor, the responsible judge has ordered the arrest of two Polish truck drivers.

Earlier in the Polish town of grudziądz was an attack on a group of Ukrainians who were shot from a gas pistol. Also, it was reported that in the village Glascow, near Warsaw, a group of unknown attacked three citizens of Ukraine.