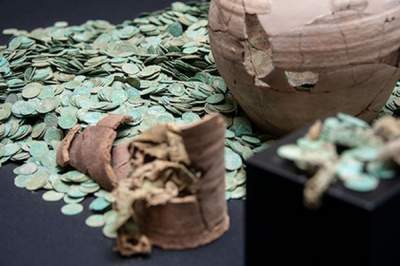 A large part of the treasure was silver to eat.

In Germany announced the discovery of one of the largest hoards of coins of the XIV century.

The treasure was found even in 2017, however, the scientists told about the discovery just now.

The treasure was discovered near the town of Ellwangen two men that unearthed the old military ammunition using metal detectors. For several months they kept the find secret, but then spoke about it to the authorities.

It is reported that a large part of the treasure was silver hellers – a bargaining chip, common in medieval Europe. The oldest coin is dated year 1280, the new – 1350-m year. Coins were minted in schwäbisch hall, würzburg, Augsburg, Konstanz and France. It was also found a silver ring.

For seven centuries the coins stuck together, but archaeologists suggest that the size of the treasure is about 9 thousand haler. In Medieval times the money you could buy a whole a farm. The cost of the treasure today is not reported.

Archaeologists plan to separate the coins from each other and clean them. Then the treasure will be exhibited in Esslingen am Neckar.