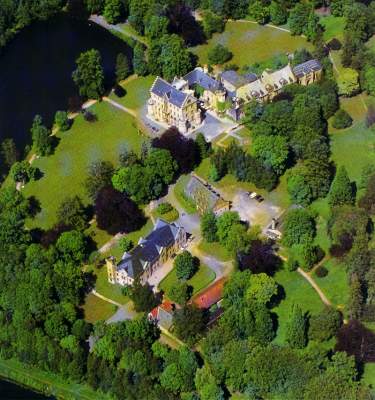 German authorities first confiscated bought for a “dubious Siberian money” historic castle to save it from destruction.

The family of the businessman from Siberia and ex-Deputy of the state Duma Anatoly Ostryagina German authorities confiscated the historic castle Reinhardsbrunn in German Thuringia, in order to save it from destruction. This decision was made by the Land administrative Department, reports Deutsche Welle.

“I am very pleased with this decision. It showed that our chosen path to return to the land ownership of the castle and the Park has justified itself”, – said Prime Minister of Thuringia Bodo Ramelow.

He noted that now “the times of decline and emergency response agencies for the protection of monuments will be left behind”.
It is also said that the government petitioned for the nationalization of the castle and a half years.

The publication reports that the fate of the monument of architecture of Russian owners were not interested in since I bought it in late 2008, and he was on the verge of destruction.

It is reported that Reinhardsbrunn Ostryagina bought for 12 million euros, translated from the accounts of the offshore company from Belize.

The report said that after the purchase the owners spent “a number of questionable operations,” for which the castle was pledged with multi-million dollar debt. This attracted the attention of law enforcement.

In the budget 2018-2019 years, the government of Thuringia has already laid 1.9 million euros at the beginning of restoration works in the castle.