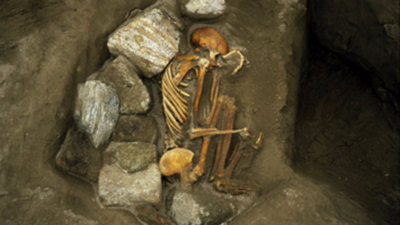 Amazing discovery was made in Scotland.

For a long time, scientists believed that the Europeans were not engaged in the mummification of dead people. However, it was found that this opinion was false. The new data emerged after the study of some of the graves on the island of South Uist (Scotland).

Experts have discovered several skeletons belonging to a man and a woman. They immediately called “Frankenstein mummies”. The analysis showed that the remains of approximately 3 thousands of years but outwardly, they look like buried recently. Consequently, the body could be subjected to mummification.

According to Mike Parker Pearson, an archaeologist from University College London, the process of mummification was produced by the same technology as in ancient Egypt. This finding is the first in the European territory, which belongs to the bronze age.

It is also important to note that the remains were located in peatlands in which there are all conditions to prevent decomposition of bodies. In the course of a more detailed analysis it turned out that woman and man are composed of parts of different people. For example, a woman had men’s skull and not your hands. Scientists believe that due to such “compositions” by the deceased was easier to meet with their loved ones in that light (in this, at least, was believed by the ancient people).