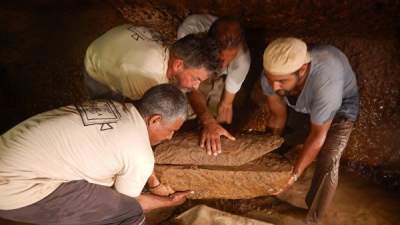 Scientists excavation started in the spring of this year.

Egyptian scientists have found in the South of the country record a large cemetery, not plundered by tomb robbers, whose territory had been buried for more than fifty contemporaries of Tutankhamun and other pharaohs of the 18th dynasty.

Burial-temple complex at Gebel-es-Sisila was built in the South of Ancient Egypt, near the town of Behdet, the capital of the southern Kingdom in the days of the pharaohs of the 18th dynasty of Ancient Egypt, Tutankhamun and his ancestors, “pharaohs-conquerors”, who bore the name Thutmose. The reign of the 18th dynasty is the peak of power in Egypt and the beginning of its decline.

The most famous and interesting from a scientific point of view, traces of this era were found in two points of modern Egypt – in the vicinity of Luxor and Karnak, in the famous Valley of the Kings, and in the town of Gebel-es-Sisila, located a few dozen kilometers North of the modern Aswan dam.

Here was the ancient Egyptian town of Behdet, where in the time of Tutankhamun and his great relatives, the Egyptians extracted the blocks of Sandstone which were then transported along the Nile to Luxor, Thebes and other parts of the Kingdom for the construction of temples, tombs and other monuments. Over time, Behdet and its surroundings constructed their own monuments, tombs and temples, which are now actively studied by Egyptologists.
Nilsson and her colleagues for several years carried out excavations on the site of Gebel-es-Sicily, exploring untouched corners Bendita and other settlements in the time of Tutankhamun and other rulers of the New Kingdom era. A year ago they managed to find a kind of “children’s cemetery”, where she was buried just four mummies of children aged 4 to 9 years.

New excavations, which scholars started in the spring of this year brought even more monumental and interesting discovery – the Swedish Egyptologists found under a five-meter layer of sand and dirt while the largest cemetery Behdet.

As noted by Mustafa al-Vaziri (Mostafa al-Waziri), the head of the Supreme Council of antiquities of Egypt, modern and ancient tomb robbers repeatedly tried to penetrate into these tombs, which they were partially flooded and covered with sand.

Despite this, a large part of the cemetery was not vandalized or simply destroyed. Inside it are preserved the three stone of the sarcophagus, and the remains of several dozen ancient Egyptians, as well as a large number of ornaments, amulets, and various funerary items.

Two sarcophagi have been excavated from the tombs inside them, the scientists found the remains of two girls, an infant and child of preschool age. The remaining artifacts and remains, archaeologists will systematically extract in the following weeks and months, gently pumping out water and removing the sediment of sand and silt.