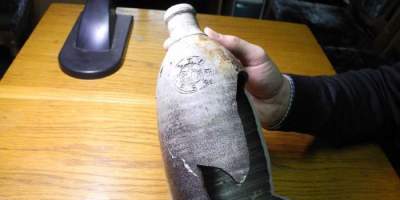 In such bottles were taken mineral water.

An unusual bottle, which is more than 250 years, archaeologists have found in Khotyn fortress in Chernivtsi region, among the ruins of the Turkish mosque.

I think this bottle was transporting expensive mineral water.

Archaeological expedition of scientists and students of the Chernivtsi national University named after Yuriy Fedkovych, under the leadership of candidate of historical Sciences Nikolay Ilkiv organized on the territory of Khotyn fortress for over 10 years. And every year manages to find more and more artifacts.

“In fact, there are some things that we find annually. Sometimes it seems that to surprise nothing, but still some such discoveries come across, sometimes even difficult to identify and to consider what it is. Well, let’s say, is quite strange, as this year was the findings of individual vessels. When we first found the wreckage in the square about a meter, we could not even imagine what it’s like. Only after post-processing was able to understand that this cookware. A bottle of water,” – said the head of the expedition, archaeologist Mykola Ilkiv.

The bottle was made of porcelane stone or porcelain – very high quality of the material from which made the dishes in the countries of Western Europe.

“We are glad that managed to find so many fragments and especially with the stigma. It prompted us about the origin of this vessel. At first it was hard to even read what the letters are. But then still we found Parallels and analogies. Here written ZELTERS , and in the middle a Latin cross with a raised bar and two letters and So on the basis of this inscription we found that these bottles were transported and stored mineral water “, – stressed Mykola Ilkiv.

How to tell the scientists, Zelters is the name of a tract of valley in modern Germany, where were the sources of natural mineral water.

“And in order for this natural gas to keep water, it is poured into a special ceramic containers and tightly sealed with something like wax. And within a month or two it retains its natural properties and mineralization. From the German lands it was exported to most regions of the world. This bottle for over 250 years approximately,” said the scientist.

According to archaeologists, this bottle is one of the first physical evidence proving the Austrian presence in Khotyn, although it was a short stage in the history of the city. The mosque, which found the bottle, the Austrians managed to turn to the Catholic Church.